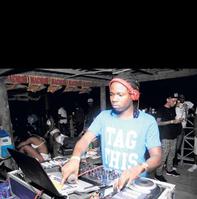 The Juke Boxx Productions selector told THE STAR that he was on his way to the funeral of producer Richard ‘Roach’ Samuels when the wheel flew off his bike.

“The wheel fly off and mi start lose control of the bike. Mi jump off and two bones in my left leg were broken,” Wah Wa said.

With the selector now prepping for surgery later this week, his management team confirmed he will be out for the rest of the month.

“We’re cancelling all his engagements for October. We’re offering all promoters whose events he was confirmed for a refund. They can choose to book him for a new date as soon as he has fully recuperated,” Shane Brown said.

“Just pray for me and I’ll be back on the road as soon as possible,” Wah Wa said.

In the meantime, Wah Wa’s Hamma Fridaze anniversary will go on as planned on October 18 at Sabina Park. Dubbed as the Zip Invasion edition, Wah Wa told THE STAR that fans can expect the same high energy and vibes that they have come to expect from his events.

For the original report go to http://jamaica-star.com/thestar/20131008/ent/ent1.html