Perspective: Phillips Has Foot In Mouth Disease? Is It Curable? … Stay Tuned … 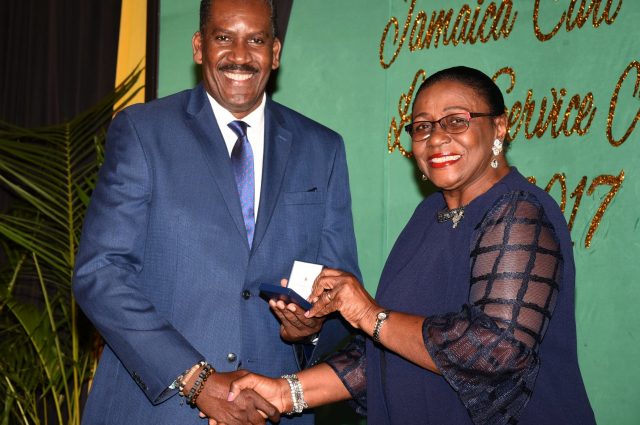 Custos Rotulorum for St. Andrew, Hon. Dr. Patricia Dunwell (right), presents Events and Commemoration Coordinator at the Jamaica Cultural Development Commission, Michael Nicholson, with his award for 27 years of service to the Government. The presentation was made during the Jamaica Civil Service Long Service Awards Ceremony at the Jamaica Pegasus Hotel in New Kingston on Friday (February 9). A total of 502 civil servants were honoured at the event.

The broad smile on Michael Nicholson’s face aptly reflected the elation he felt about being among 502 civil servants who have been honoured for their years of invaluable service to Jamaica.

Although he is readily recognised as an actor, having portrayed the character ‘String Beans’ in the very popular local television series, ‘Royal Palm Estate’ and its successor, ‘The Blackburns’, among other roles, Mr. Nicholson has served the Government for 27 years, having worked with the Jamaica Cultural Development Commission (JCDC) since 1990, where he currently holds the position of Events and Commemoration Coordinator.

Mr. Nicholson, along with colleague civil servants who have served for 25 years or more, were honoured during the Jamaica Civil Service long service awards ceremony at the Jamaica Pegasus Hotel in New Kingston on Friday (February 9).

Prime Minister, the Most Hon. Andrew Holness, headed the list of Government officials who presented medals to the honourees.

This award holds even greater significance for Mr. Nicholson who was bestowed with a Badge of Honour last year for long and faithful service to the JCDC.

“The fact that the Government (and) the Jamaica Civil Service Association noticed (my hard work) means a lot to me,” he told JIS News.

Mr. Nicholson added that he is “very excited” to have been rewarded for doing what he loves, quipping that he hadn’t realised his work was being noticed.

“Everyday for me is a different challenge… another exciting thing to happen… I love my job,” he gushed.

Mr. Nicholson’s delight at being honoured was also shared by another awardee, Dr. Herbert Lawrence, who is attached to the North East Regional Health Authority (NERHA), which he has served for more than 26 years.

“I really feel good about it, as over the years, I have worked tirelessly to serve the people of the north east region,” he told JIS News.

Another honouree, Lavern McNish, who has been a cleaning attendant with (NERHA) for the past 25 years, was also appreciative of the recognition.

“It has been a very good experience. I have no regrets working for the public,” she said.

Another veteran, Georgia Morris-Josephs, who has served the Government for 27 years through the Office of the Services Commission, also expressed gratitude for the recognition, adding that she felt very proud to be honoured.

In his remarks, Finance and the Public Service State Minister, Hon. Rudyard Spencer, thanked the honorees for their exceptional service and hard work, noting that they have been and continue to be role models for others.

“Many of our civil servants often rise beyond our expectations and deliver above and beyond the call of duty, bringing innovation and improved skills to their duties to make the lives of the people they serve more comforatbale and the Government more (efficient and effective). It is (therefore) necessary to encourage, motivate and reward…such tenure of service,” he said.

In a citation encapsulating the Government’s appreciation for the work of civil servants, this year’s honourees were praised for their roles in assisting to carefully monitor far-reaching projects and craft policies and legislation to allow Jamaica to become a place where no one is left behind.

“We mark how you have used the expansion of the Internet to adapt and improve processes by widening applications in e-commerce that are enabling services to be delivered faster to Jamaicans at home and in the Diaspora; sharing best practices with local and international counterparts; integrating technologies to sustainably and effectively use human and physical resources, and also financial capital,” the citation read.

The awards ceremony was originally scheduled to take place on the lawns of King’s House last November, but was postponed due to inclement weather.