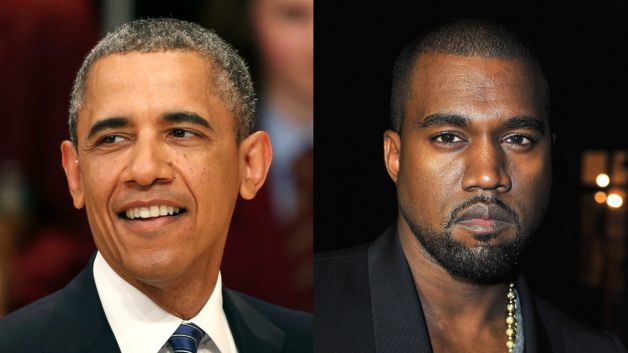 “I’ve got a lot of his stuff on my iPad,” president admits.

President Obama may not be a fan of Kanye West‘s lifestyle, but he does appreciate Yeezy’s music. The president admitted to People that the outspoken rapper has undeniable talent.

“Kanye’s music is outstanding, though. I’ve got a lot of his stuff on my iPad,” he told the magazine. When it comes to Kanye’s tendency to rant, says Obama, “If it was a concert, then I might not mind listening to him.”

The war of words between the president and Yeezy started when Obama chided West and his fiancèe Kim Kardashian for their ostentatious lifestyle. “Kids weren’t monitoring every day what Kim Kardashian was wearing or where Kanye West was going on vacation and thinking that somehow that was the mark of success,” the president said last August during a speech about the American Dream.

Obama has also referred to West as a “jacka**” on more than one occasion. As for West, he claimed in November that he wasn’t going to let the president’s words bother him. “I don’t care if somebody’s the president or not,” he said. “I care about thoughts and how you helping people, and what you bring to the world. Like, my music brings joy to people. What I create brings joy to people.”

West also claimed that Obama “used” him back when he was first running for president. “I just think that we’re pop icons, and the president likes to use that type of thing just to be down and stuff.”

For the original report go to http://www.bet.com/news/music/2013/12/23/barack-obama-still-enjoys-kanye-west-s-music.html