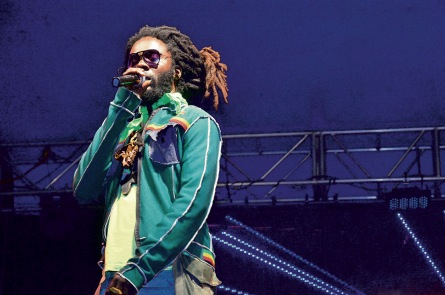 SINGER Jah Bouks admits he had little knowledge of Angola when he recorded the song Call Angola last year. That did not stop it from becoming one of the biggest hits of 2013.

Interestingly, Call Angola is the St Thomas-born Jah Bouks’ first recording. Last week, in an interview with the Jamaica Observer, the 38-year-old said he is not surprised at the song’s success.

“A good music; Jamaicans always gravitate toward good music. The only thing mi surprised ’bout is it tek off so fast without mi spen’ a bag a money,” he said.

Call Angola was produced by Jah Bouks’s mother Patricia ‘Zion’ Panton for her Sun Isis Entertainment label. Though he had several years’ of singing on sound systems under his belt, Jah Bouks had never recorded prior to Call Angola.

“It’s all about having a game plan. As dem sey, nuthin happen before it time,” he said.

Jah Bouks performed Call Angola on this year’s Magnum King’s and Queen’s of Dancehall contest, in which he placed third. It was shortly after that the song was released.

With the song still enjoying steady airplay, other producers approached Jah Bouks to record songs. They include Stone Love for whom he recorded Moma’s Daughter and Rohan ‘Snow Cone’ Fuller who produced Going Home.

Jah Bouks was born Warin Smith in Winchester, St Thomas; he grew up in Portmore where he worked the sound system circuit. Much of his exposure, however, came at one of the Sunshine City’s most popular clubs.

“Mi used to sing a nuff after-work jam a Cactus. Mi get a lotta exposure dey so,” he said.

Jah Bouks is the latest singer to score his first hit approaching 40. In 1994, 39-year-old Everton Blender broke through with Lift Up Your Head which, like Call Angola, became an anthem on radio and in the dancehall.

For the original report go to http://www.jamaicaobserver.com/entertainment/Singer-Jah-Bouks-finds-his-calling_15688672