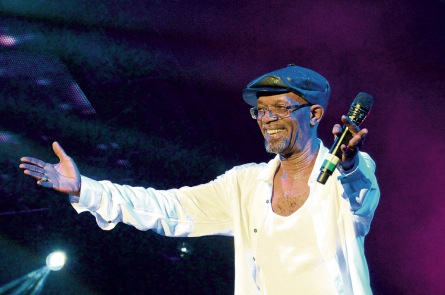 REGGAE singer Beres Hammond will be one of the featured acts at this year’s staging of the Jamaica Jazz & Blues Festival to be held at the Trelawny Multi-Purpose Stadium on January 30 to February 1, 2014.

Hammond, 60, is one of five nominees for the Best Reggae Album category at the 56th annual Grammy Awards scheduled for January 26 at the Nokia Theatre in Los Angeles.

The nomination of One Love, One Life is Hammond’s second. The first was for his 2001 effort Music is Life.

In October, the St Mary-born singer was bestowed Jamaica’s fourth-highest honour — the Order of Jamaica — by the Government for “his exceptional and dedicated contribution to the music industry”.

Hammond has been recording since the early 1970s. Though he first came to prominence as lead singer for the Zap Pow band and as a solo balladeer with producer Willie Lindo during that decade, it was not until the 1980s when he embraced the emerging dancehall sound that he broke through in a big way.

The Lindo-produced What One Dance Can Do revived his career in the mid-1980s. By the next decade, Hammond was a bona fide star, recording countless hit songs for producers like Donovan Germain, head of Penthouse Records.

Germain’s hits with Hammond include Tempted To Touch and Pull up The Vibes.

An international cast of American singers is assembled for the 18th staging of the Jamaica Jazz & Blues Festival. They include Chaka Khan, Toni Braxton, Aaron Neville, Crystal Gayle, Chrisette Michele and Joe.

For the original report go to http://www.jamaicaobserver.com/entertainment/Beres-for-Jazz—Blues-fest_15716377