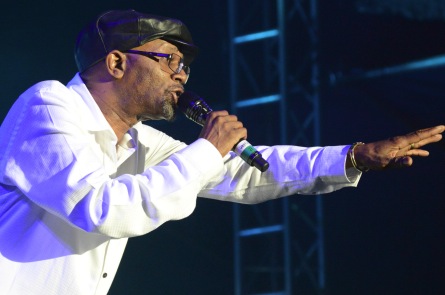 BERES Hammond was still in the stages of a comeback when he first met music producer Donovan Germain in 1990.

He was 37 years old and looking to secure studio time to record songs at Germain’s Penthouse Records, then located in Cross Roads.

“I didn’t have any time available, but I told him I would give him my time if he would do a song for me in return,” Germain recalled.

Hammond agreed. Tempted to Touch, the first song he did for Germain, went to number one.

The Germain-Hammond combination has borne fruit for over 20 years. Falling In Love All Over Again, Respect to Your Baby, and Pull Up the Vibes are some of the other hits they have enjoyed.

Germain says he had no issue with Hammond’s ‘seniority’.

“Beres Hammond is Beres Hammond… He gave my generation so many great songs,” he said. “All I saw was talent, not age.”

Hammond reached his zenith in the mid-1990s. Two of his hit songs, the Tappa Zukie-produced Putting Up Resistance and Double Trouble, produced by Steely and Clevie, were anthems.

According to Germain, it was Who Sey, the deejay version of Falling in Love All Over Again, done with Buju Banton, that really gave Hammond a younger fan base.

“You had a great singer/songwriter and a hot young deejay with a different following. It was like ‘how wi going merge both of them?’ But it worked.”

Banton was not born when Beres Hammond started his career in the late-1960s. He was in diapers when Hammond recorded soul songs like One Step Ahead and Oh I Miss You for producer Willie Lindo, a decade later.

Hammond has maintained his run as one of reggae’s prolific hitmakers. Last year, he made the charts with the Germain-produced Feel Good.

For his endurance, Beres Hammond will be awarded the Order of Jamaica tomorrow, during the National Honours and Awards ceremony at King’s House.l