Gage making waves with ‘Tun Up’ 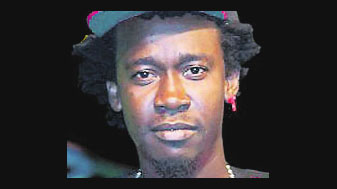 In a video posted online, Danger Lee, who is from Montego Bay, St James, accused Chi Ching Ching of copying the concept for his dance song Watchi Wyah, but the dancer turned deejay told The Star that he was not responsible for the name of the song.

“Is a youth name Hard Fi Deal Wid have to deal with that. Because a him come up with the name for the song, mi only build the song,” he told The STAR, after initially refusing to comment on our first attempt.

Hard Fi Deal Wid took full responsibility for the title of the song. However, he did not wish to bash Danger Lee.

“I came up with the name Watchi Wyah because of an incident where a friend of mine was electrocuted in a mango tree and the persons below him were telling him to watch the wire. I told Chi Ching Ching about the name and he made the song and dance. Him (Danger Lee) is not the first to claim the song title, he is actually the third person, but I guess this always happen with slangs in dancehall. What he should do is set a link with us instead of resorting to negative vibes. Because Chi Ching Ching is a genius, so try to set a link with us,” he said.

According to Danger Lee, who vented on social media for 4:45 seconds in a video footage, Chi Ching Ching and other established acts have been copying from young talents.

According to the artiste, persons in Montego Bay are already familiar with his song Watchi Wyah, however, Chi Ching Ching’s version is on commercial radio and makes it difficult for him to claim the concept as his own.

“True yu not even know how it burn mi youth. Because man a put in the work a try make sure that people can hear it. The man even have mi thing on radio. Yu never ask mi fimi thing bredda, a H.A thing, a me sey Watchi Wyah, a Montego Bay mi come from. MoBay unno know mi thing to a nuh little bit a campaign. mi duh fi get mi thing out deh and a man hear mi thing and tek on yu thing and a duh road wid it like a fi him? (Hiss teeth), a true unno nuh know enuh,” he said.

Danger Lee also played his Watchi Wyah song which certainly had lines similar to Chi Ching Ching’s version, except for his explicit and aggressive lyrics.

“Everybody unno know a my thing, and mi want unno mek the people dem aware sey a mine. Chi Ching Ching a thief. Youth unno need fi mek the younger artiste dem get a shine to, they need a shine to. A same suh mi see di Kreecha a bawl sey a $40,000 him get fi dat deh big song deh wey a run road, mi a one more a di victim dem and di world need fi know bout this,” an upset Danger Lee said.