Gov’t Working to Reduce Use of Force – PM

Coalition for Tobacco Control Concerned About Smokers in Low-Income Category 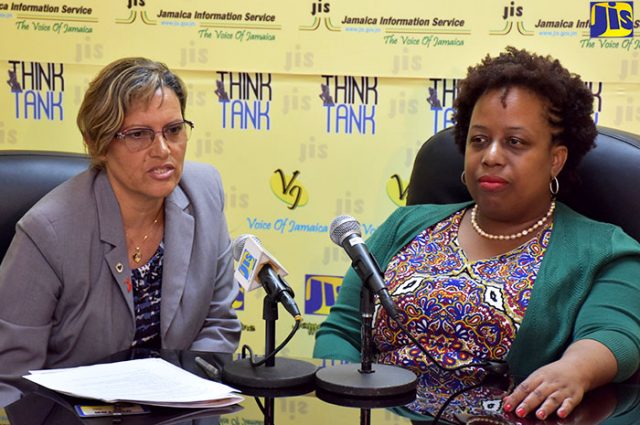 Photo: Executive Director of the Heart Foundation of Jamaica and Jamaica Coalition on Tobacco Control Board Member, Deborah Chen (left) addressing a Jamaica Information Service (JIS) Think Tank on the effects of tobacco addiction on low-income households. The forum was held at the JIS Head Office in Kingston on Wednesday, May 31, which was observed as World No Tobacco Day. Also pictured is Director, Non-Communicable Diseases and Injuries Prevention, Ministry of Health, Dr. Tamu Davidson-Sadler.

The Jamaica Coalition for Tobacco Control (JCTC) is concerned about the debilitating effects of tobacco on persons from low-income households using it.

Speaking at a JIS Think Tank on Wednesday, May 31, which was observed as World No Tobacco Day, JCTC Board member, Deborah Chen, explained that the majority of Jamaican tobacco users are from the lower socio-economic group.

According to Mrs. Chen, who is also Executive Director of the Heart Foundation of Jamaica, 20 per cent of persons who only attained a primary education smoke.

This, she said, is in stark contrast to the 14 per cent of persons with secondary education and six per cent of individuals who attained tertiary training.

“The persons who are buying the cigarettes are those who can ill afford it, and this is where the economic issues become a major concern. If you smoke a pack a day (using the average going price for different brands of cigarettes) you will spend about $360,000 a year on cigarettes, if you smoke 20 per day. If you buy them by the stick, then it will be more than the $360,000,” she outlined.

This, she said, was unfortunate, as it was the most vulnerable members of the society who would suffer the most.

Mrs. Chen said consequent on the minimum wage being just over $300,000, this raised concerns about the ability of smokers in the lower income bracket to sustain themselves and their families, if they try to maintain this costly habit.

In this regard, Mrs. Chen said the Coalition urges smokers in the lower income bracket to consider redirecting funds spent on cigarettes into taking care of their households.