Sean "Contractor" Edwards holding a plaque he received from Billboard.

Music producer Sean ‘Contractor’ Edwards is over the moon after receiving a plaque for hitting the Billboard Compilation Album Chart for his project “Tropical House Cruises to Jamaica: The Reggae Collector’s Edition”. The Executive Producer noted that he and his team achieved this feat in 2020, for the project that took just six months to complete and made its debut in 2018. 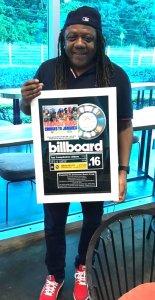 Sean “Contractor” Edwards holding a plaque he received from Billboard.

“The album is a compilation album with some Reggae giants like Capleton, Sizzla, Peetah Morgan, Singing Melody, and Wayne Wonder; as well as dancehall stars like Vybz Kartel, Skillibeng, and Tommy Lee Sparta. There were also Hip Hop stars DaBaby, Royce da 5’9”, and Jethro Sheeran. The album was headlined by Shatta Wale from Ghana,” noted
Edwards.

The director of Contractor Music Group added that putting Shatta Wale in the forefront was a strategic marketing move, and by all indications, it paid off. “We made Ghana’s Shatta Wale the face of the album, in hopes of penetrating the African market. He is known as the African King of Dancehall,” he said.

For the Executive Producer, the set marked a milestone in his career, because of its success across notable music charts.

“I started this compilation album series and concept in 2018. All of the albums in the series have hit Billboard, but this one was very special because it broke several records. It debuted in Ghana at No. 1 in all genres and Shatta Wale’s song, “Dream”, debuted at No. 1 in Ghana in all genres. The album also debuted in the top 10 on the iTunes Reggae Charts in 20 countries,” Edwards continued.

He further revealed that he plays his cards right when it comes to compilation projects, and most importantly selling them to his target audience. “What makes me stand out is that I create a concept for albums then market them around that concept rather than just throwing a bunch of songs together and calling it an album,” he said.

Edwards is currently working on another compilation project aimed at cracking into Asian countries such as Malaysia, India, Pakistan, Sri Lanka, and Bangladesh.

In the meantime, he is imploring young producers to explore their potential and audiences, if they want to become globally renowned.

“I would tell upcoming producers to broaden their horizon, target audience, and study the market in the rest of the world—not just Jamaica. This is because other countries stream music way more than Jamaica does,” he said.