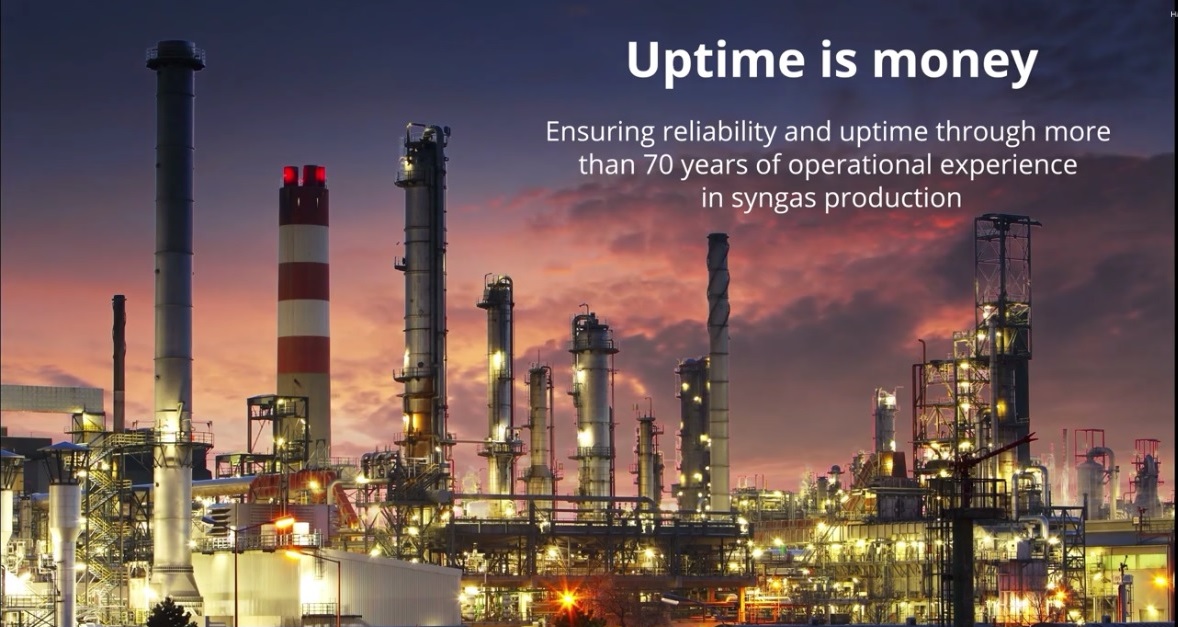 Rapid Industrialization for Economic, Social, and Environmental Sustainability (R.I.E.S.E.S.) is

having a strategic vision is being able to determine the present value of the long-term savings from a program of investment and cost-cutting to support the development of a sustainable growth and economic development master plan.

The Jamaican Diaspora must unite as political entity (The Commonwealth of Jamaican Citizens in the Diaspora) to demand governance conditionality on the use of a Diaspora Bond to finance our Rapid Industrialization for Economic, Social and Environmental Sustainability (RIESES) Program by Repurposing Jamaica’s Alumina Refineries to be the Central Processing Hub for the Regional Supply of Bauxite and Peg the Jamaican Dollar to the Price of Aluminium. The Jamaican dollar would have value US 33 cents instead of US 0.0078 today had we pegged the dollar to the price of aluminum. If only we had the insight not only to use the human capital of the Jamaican Diaspora to underwrite the value of the Jamaican dollar but also the price of aluminum. After all, we were major producers of alumina ranked 2nd in the world. Since 1986 to July of 2016 the world price of one metric tonne of Aluminium appreciates some 44% in value from US$1,129 per tonne to US$1,629 in 2016 an average increase of 1.48% over 30 years. Compared to the Jamaican Dollar over the same time period, it fell in value some 97% to the US$ or an average of 3% per year for the same time period. From US$1=JA$5.50 in 1986 to now US$1=JA$127.60 in July 2016. 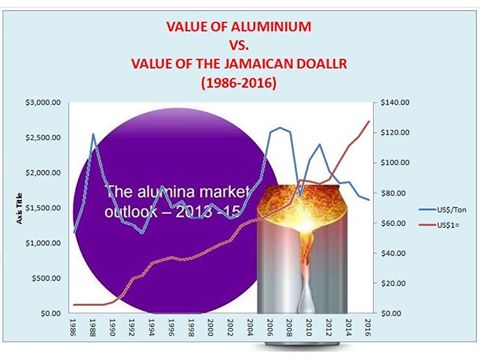 “In the case of Jamaica, there is already an inherent disadvantage in the fact that its Alumina content is lower than average; 6 tons to make 1 ton compared with only 4 tons of the Guyanese Ore. High electricity costs and inefficiencies of around 40% (equivalent to 5 million barrels of oil) result in high energy cost. The combination of these and other factors drove the closure of the Jamaican Refineries as they are among the least efficient Alumina Plants in the World.”-Al Binger, Energy Efficiency In Jamaica; Challenges, Opportunity, and Strategies for Implementation, UN 2011.

Jamaica has an abundance of sunlight; combined with Clean Coal Technologies (CCT). the government could easily bridge the renewable energy gap by subsidizing the high capital cost of renewable energy development. Repurposing Jamaica’s Alumina Refineries as the foundation for an energy-based industrialization for real growth and job creation using CCT. Coal is an abundant natural resource with enormous potential to be converted into clean fuel and alternative feedstock for many chemicals. “In recent years we have made quantum leaps in the upgrading of coal and processing of waste products from coke ovens into higher value products and cleaner energy. Our solutions not only make it feasible but also economically attractive, to process these feedstocks directly at source into SNG, gasoline or other high-value products rather than transporting them to be processed closer to market”.

Clean Coal Technologies (CCT) will allow Jamaica to refine Alumina more efficiently and become once again a world leader in Alumina Production by increasing output to 10 million tons annually of imported bauxite ore from Latin America and the Caribbean with 22% of the world reserves of bauxite. In particular, the rich Guyanese Bauxite Ore in the short-term could lessen the environmental impact of developing new bauxite mines in the Cockpit Mountain Regions of Jamaica as other reserves would take a longer time to come on stream.

In addition, CCT will produce additional energy in the form of by-products to run our Liquefied Natural Gas (LNG) fired power plants by off-setting LNG with Synthetic Natural Gas (SynGas) from coke gas. All the Carbon Dioxide (CO) produced from the coke oven in which coal is upgraded into clean fuel and alternative feedstock for many chemicals, will be captured to enriched coke oven gas as SynGas. “Coke oven gas has many valuable potentials as it contains hydrogen, methane, ethane, propane, carbon monoxide, carbon dioxide, nitrogen, oxygen, traces of tar, benzene and other organic compounds. The gas can be used for the production of a range of products including hydrogen, ammonia, methanol, DME and gasoline, in addition to the production of substitute natural gas (SynGas). DME (dimethyl ether) is a clean-burning, non-toxic, potentially renewable fuel. Its high cetane value and quiet combustion, as well as its inexpensive propane-like fueling system, make it an excellent, inexpensive diesel alternative that will meet strict emissions standards”.

Carbon Dioxide can be sequestered to enrich and significantly increases SNG production from low-cost Coke oven gas contains 20-25% methane by including a methanation process, carbon monoxide, carbon dioxide and higher hydrocarbons are converted with hydrogen into more methane. The result is an increase in SNG production of 70-100%. If carbon dioxide is available from an external source, the methane content might even be increased by 100-125%.”

Alumina production can now be a sustainable process through green engineering and be financially feasible, socially responsible and environmentally sensitive with a net impact on Green House Gas Emissions. Other sustainable features will include total separation of the Coke Oven and By-product Plants from contact with groundwater by way building both plants on top of an enclosed foundation floor of over eighteen inches (18) thick with monolithic side walls along the perimeter of the plants as an extension of the floor foundation. What is at stake is full employment with well-paid engineering, high-tech instrumentation and control, technician, professional and skilled laborer jobs and to once and for all drastically reduce the crime rate.

In order to produce some 7 million tons of Alumina annually, the Government along with private interest must invest some US$6-7 billion in a Clean Coal Energy Facility to generate approximately 3,300 MW of electricity. This investment will create well over 30,000 jobs (using Jamaican workers) in the economy during the construction period of about 3 years. That is 16,000 full-time jobs directly from the construction activity plus another 14,000 indirectly contributing some US$2.6 billion in earnings and US$9.0 billion in GDP. After construction and during operation for 30 years the plant will employ some 500 direct workers in addition to 800 indirect jobs with total earnings of US$ 100 million annually and US$330 million in GDP.

At 10 million tons annual capacity the country could earn some US$4.5 billion in gross revenue adding approximately US$18.0 billion to GDP in addition to the thousands of jobs that will be created from clean coal by-products ranging from fertilizers to pharmaceuticals and clean energy to run electricity generation.

A Diaspora Bond to fund RIES and Sustainable Infrastructures such as Coke Gas from coal, Bio-Gas from Wastewater Treatment, Modernization of our rail system, rebuilding of local roads and invest in the residential and commercial development of inner cities and major urban centers across the island by recapitalizing and rebranding the Development Bank of Jamaica as the Jamaica Infrastructure Investment Bank (JIB) under a Public Private Partnership model.