Partnership Aims to Raise Awareness on the Importance of Learning to Swim, Bridging the Minority Swim Gap & Providing a Role Model for Young Children 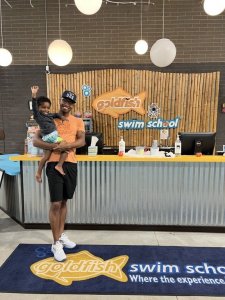 Sadly, drowning remains the number one cause of injury-related death among children ages 1-4, taking the lives of three children in the United States every day. In addition, it’s been reported that more than 60 percent of African American children cannot swim. Goldfish Swim School and Jones are committed to making a positive impact to help lower these staggering statistics by bringing greater awareness to the importance of swim lessons, as they have the ability to reduce the risk of childhood drowning by 88%.

Jones has felt the impact of these statistics firsthand. At five-years-old, he nearly drowned while visiting an amusement park with his family. It was at that point his parents enrolled him in swim lessons, and his love of the sport developed. From learning to swim, to becoming an Olympian, to championing water safety and drowning prevention, Jones has made it his life mission to bring greater awareness to the importance of all children learning to swim.

As a newer parent himself, Jones’ passion for water safety only continues to strengthen. Jones and his wife, Rupi, welcomed their son Ayvn into the world in 2019. Since then, Ayvn has already developed a love of the water, taking swim lessons at Goldfish Swim School.

“I believe things come full circle, and my life is the epitome of that,” said Jones. “You know, to be honest, I never put out the ‘I’m retiring’ social media post. I never felt my work in swimming was done. I’ve committed to a lifetime of community advocacy and set out on a mission to help people to understand the importance of learning to swim. I could not have found a better swim school partner with which to align. I’ve personally seen the impact Goldfish makes in children’s lives. My son is a Goldfish Swimmer, and I am proud to call myself a Goldfish Dad. While my time competing in the pool may be finished, my work is far from done. I have been working in the learn-to-swim space for 12 years, and by teaming up with Goldfish Swim School, we will create a powerful force that will make big waves in water safety awareness!”

The partnership came naturally as Jones is an ambassador and board member of the USA Swimming Foundation, the philanthropic arm of USA Swimming, where Goldfish Swim School is an official partner. Goldfish Swim School has committed to raising $1 million for the Foundation, which supports swim lesson providers with resources, materials and grant funding to allow the opportunity for every child across the country to learn to swim. Jones recently teamed up with Goldfish Swim School for its latest giveback campaign – ‘Safer Swimmer Pledge’ – that reached over 400 million people with the message of prioritizing water safety and drowning prevention. Jones leveraged his alignment with Speedo USA as the Philanthropic Sales Manager to incorporate an additional fundraising arm to the campaign.

“Cullen has long felt like a member of our Goldfish Family as he continuously goes above and beyond to support our mission of water safety,” said Chris McCuiston, CEO & Co-Founder of Goldfish Swim School. “This formal partnership is just another step in the right direction as we work together to make even bigger waves in water safety education, resources and swim lessons. We could not be more honored to have Cullen by our side as we push the boundaries of innovation to highlight the importance of swim lessons for all children.”

As demand continues to rise – with Goldfish Swim School now teaching more than 150,000 children each week how to be safer in and around the water – the brand and its partners are committed to going above and beyond to nurture a culture that provides a GOLDEN Experience! through lessons, campaigns, events and more.

Goldfish Swim School provides swim lessons and water safety instruction to infants and children ages four months to 12 years, teaching children how to be safer in and around the water. Each school offers swim lessons and programs using a proprietary philosophy, The Science of SwimPlay®, to build life skills both in and out of the water using play-based learning in a fun and safe environment. The franchise network spans 120-plus schools across North America and each school’s number one focus and main priority is always the same – educating children on water safety while teaching them how to swim and respect the water.