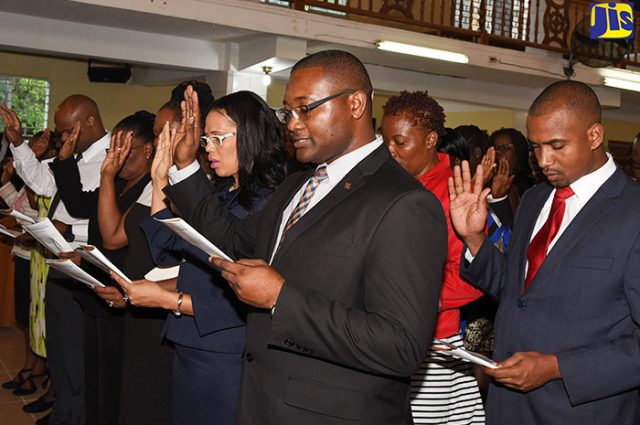 Governor-General, His Excellency the Most Hon. Sir Patrick Allen, in short order, will appoint five Commissioners to a single Anti-corruption Unit, which will investigate and prosecute corruption in Jamaica.

Justice Minister, Hon. Delroy Chuck, confirmed that the Governor-General has now signed the Integrity Commission Bill, which was approved by the Senate in July, paving the way for the establishment of the Unit.

“After the Governor-General appoints the five Commissioners, they will begin the process of implementing the terms of the (unit),” Mr. Chuck said.

He was speaking to reporters following the commissioning of 241 Justices of the Peace (JPs) for the parish of St. Catherine at the Portmore Seventh-day Adventist Church on November 8.

The new single Anti-corruption Unit will incorporate the Office of the Contractor General, the Commission for the Prevention of Corruption, and the Integrity Commission.

Meanwhile, Mr. Chuck informed that debate is to begin next Tuesday (November 14) in Parliament on the new Justices of the Peace Act of 2017, which seeks to strengthen procedures for the selection, appointment and regulation of JPs.

Changes to the new Bill will provide for the expansion of the geographical jurisdiction of JPs, allowing them to give islandwide service in respect of non-judicial functions.

“We will also be removing the upper limit, so that even if a person is over 70 and is still available and capable, he or she can still be appointed a Justice of the Peace,” Mr. Chuck noted.

The Minister urged the new JPs to serve with integrity and to “help us to make Jamaica what it can be”.

For his part, President of the Lay Magistrates’ Association, St. Catherine Chapter, Phillip Keane-Dawes, encouraged the new JPs to avail themselves of workshops coordinated by the Justice Training Institute and by the Ministry of Justice.

He called on them to reflect upon the importance of their roles, which will require them to serve in certain areas at any time, especially in Zones of Special Operations (ZOSOs).

Superintendent of Police in charge of Operations in the St. Catherine South Division, Leighton Gray, acknowledged the role of the JPs in the fight against crime, emphasising that “we cannot do without them”.

He also implored JPs to remember their Oath of Office and to “take time out to analyse its essence”.

Representing the largest number of JPs ever to be commissioned at one time, the 241 men and women underwent four months of training facilitated by legal luminaries in the areas of human rights and freedoms, history of the office, code of conduct and rules the JPs must follow.