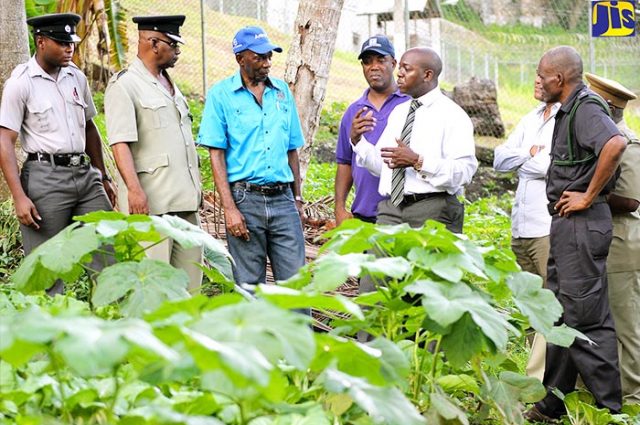 The Ministry of National Security is expanding collaborations across Government that are primarily aimed at boosting the Department of Correctional Services rehabilitation programmes for inmates in penal institutions.

State Minister, Senator the Hon. Pearnel Charles Jr., says this has commenced in discussions with the Ministry of Industry, Commerce, Agriculture and Fisheries on how best to advance and expand farming activities within correctional centres by maximising the outputs of land being used, and utilising the labour of inmates at the facilities.

“We intend to increase the efficiency and maximise the potential of those assets… not only as a means of providing food, but facilitating the kind of skills that will allow inmates who will become eligible for parole to be properly equipped for the reintegration process,” he told JIS News while on a tour of the Richmond Farm Adult Correctional Centre in St. Mary on August 22.

“Also, where possible, we want, through our collaboration with HEART Trust/NTA, for them to receive the necessary certification for whatever activity they were engaged in while in custody,” the State Minister said.

The collaboration with the Agriculture Ministry follows initial partnerships forged with the Ministries of Education, Youth and Information; and Culture, Gender, Entertainment and Sport.

Senator Charles said the goal is to provide “purposeful” rehabilitation activities for inmates with a view to facilitating their successful reintegration into society, adding that “we do not want anyone to come out and then reoffend and end up back (in a penal institution).”

“We have to break the cycle of violence, and a big part of that is ensuring that persons who have committed crimes and are incarcerated are given a fair chance to put themselves in a position to really do something constructive,” he said

In this regard, Senator Charles said the collaboration being embarked on with the Ministry of Agriculture will provide that opportunity.

Noting his advocacy for a collaborative Government approach to administering rehabilitation programmes within the correctional system, following his appointment as State Minister, Senator Charles said this was initiated through the partnership forged with the Education Ministry and formalised under a Memorandum of Understanding (MOU).

He said the partnership, along with its attendant engagements, inclusive of skills training, which are being administered through HEART Trust/NTA, as well as the Jamaican Foundation for Lifelong Learning, “is one of the strongest collaborations that we have to date”.

Senator Charles pointed out that the MOU is being revised to expand its provisions to include certification, “because we want to increase the (opportunity) of them being their own entrepreneurs, creating their own jobs or getting jobs”.

He said the collaboration with the Culture, Gender, Entertainment and Sport Ministry enabled the Department of Correctional Services to display several pieces of craft and paintings, done by inmates, at the Jamaica 55 Independence celebrations exhibition earlier this month. The exhibition was mounted at the Independence Village at the National Arena in Kingston.

“So, there is a multiplicity of positive outcomes for this kind of collaboration,” the State Minister said.

For his part, Minister without Portfolio in the Ministry of Agriculture, Hon. J.C. Hutchinson, said he anticipated the participation of inmates at Richmond Farm and other correctional institutions, “so that we can get (this) property and others in full production”.