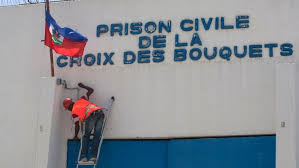 CROIX-DES-BOUQUETS, Haiti _ Sudden gunfire rattled the morning routine outside the Croix-des-Bouquets Civil Prison and soon inmates, many barefoot and shirtless, dashed frantically from the maximum-security facility, startling street vendors as they looted their wares and fled through the unpaved streets.

One month after the prison break, only about 75 of the 329 escapees have been recaptured, some found across the border in the Dominican Republic, and at least three in the Bahamas. About 255 of the men, many accused of serious crimes such as kidnapping and rape, remain at large, leaving residents in the greater Port-au-Prince area worried and frustrated.

“I feel fear in my heart when I’m walking,” Bency Dorvil, 47, said as he trudged past cinderblock homes in Petionville, a hillside city that lies roughly 10 miles (16 kilometres) southwest of the prison. “The guys have guns and I don’t have any.”

Like many others, he said, he is leaving work early to avoid having to return home in the dark.

While crime long has troubled Haiti, the Aug. 10 breakout exposed serious flaws in the country’s justice system. Lax security, overcrowding and deep-seated corruption have made the prison system among the worst run in the Western Hemisphere. Repeated governments have lacked the resources or will to change it.

Details about what led to the escape are still emerging.

According to some reports, gunmen pulled up to the prison in two SUVs, opening fire and quickly overwhelming the poorly equipped guards. The official account, however, says the shooting erupted from within, with inmates using smuggled guns to overtake their captors.

“We ran to save our lives,” recalled Mimose St. Louis, a 32-year-old who sells rice and beans from a small wooden stall near the prison and recalled that inmates were brandishing weapons as they stole her money and food.

At least 100 vendors sought cover in the yard of Marlene Renelus, 35, who said she sheltered the terrified people behind her gate: “I didn’t want people to get killed.”

Some suspect the attack was designed to free Clifford Brandt, the son of a prominent businessman, who had been imprisoned since 2012 for allegedly kidnapping the adult children of a rival businessman. Brandt was captured two days later near the Dominican Republic border.

Prime Minister Laurent Lamothe said United Nations officials and the U.S. Marshals Service are helping in the ongoing hunt for escaped prisoners. Haiti, a country of more than 10 million people, has only about 11,000 police officers.

“We will not rest until all of them are back where they belong, which is jail,” Lamothe told The Associated Press in a recent interview at his office in Port-au-Prince.

Some Haitians wonder what additional steps police will take, if any, to protect them and their children.

Luckson Jodesty, 34, said he worries for his two children, ages 7 and 10, especially since classes started on Monday.

“Since school is opening, I want to know if they are taking any kind of security measures for the children,” he said.

Justice Minister Jean Renel Sanon told the AP he believes most of the escaped prisoners remain in Haiti, noting that police have found several of them walking on the streets. He stressed that people are not in danger.

“We’re always chasing after them,” he said. “They don’t have time to commit crimes.”

However, when pressed for details, he acknowledged that at least one prisoner was armed with a gun when caught.

The Croix-des-Bouquet Civil Prison, built by Canada in 2012, held 899 inmates at the time of the break out, some 130 over its capacity.

It was Haiti‘s largest prison escape since 2010, when more than 4,200 inmates fled the notorious National Penitentiary in downtown Port-au-Prince when it was damaged by an earthquake that devastated the capital. More than three-quarters of them remain at large, including alleged gang members and serious criminals.

Sanon said he plans to demolish the National Penitentiary, which is the country’s oldest and largest prison. Built to hold up to 1,000 inmates, it currently houses 4,338. Plans are for inmates to be sent to other prisons until three new ones are ready, including one planned for Haiti‘s central plateau.

“We have to do this,” Sanon said. “It is not a good idea to have the jail in the city so close to people. It’s a matter of safety.”

At Croix-des-Bouquet, steps are being taken to improve security. Authorities suspended at least 18 officials, including several guards and the Croix-des-Bouquets police chief and its prosecutor.

Workers have started to lay down wiring for security cameras at the prison, and officials say they soon will place ankle monitors on the most dangerous inmates there, a plan they say will be implemented in other prisons as well.

Now with a new director and some new guards, the
Croix-des-Bouquets prison appeared calm last week, when AP
journalists were granted a rare, but restricted, tour. An official
pointed out “Europe” block _ each of the blocks is named for a
continent _ which had housed most of the escapees. Inmates called to
the journalists, saying they wanted to be interviewed about what
happened but the authorities would not allow it. Guards declined to
speak.

Jean Sala Augustave, in one of his first acts as the new director, recently posted notices warning guards that they are prohibited from switching shifts or transferring detainees to another cell without previous authorization, hoping to avoid the type of collusion that may have played a role in the Aug. 10 breakout.

Inel Torchon, the new prosecutor for the district, told the AP that he plans to review the cases of all inmates to help ease overcrowding.

Haiti‘s corrupt and overwhelmed justice system long has forced many suspects to linger in prison without charges. Often, inmates spend more time waiting for trial than what they would serve if sentenced for a crime.

“I’m going to do my best to bring every prisoner to court, and they’re going to know the status of their case,” he said.