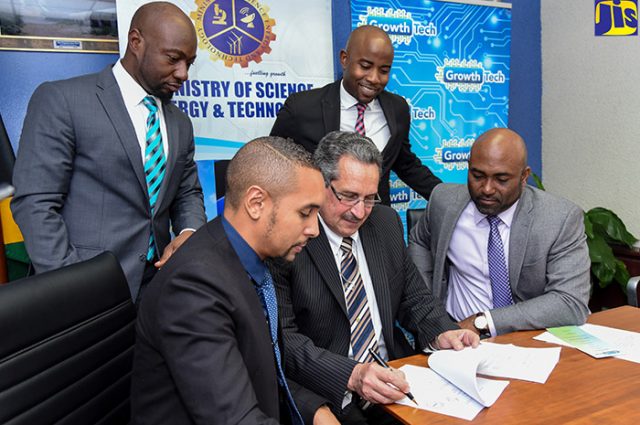 Beginning December 2018, commuters will have free access to the Internet when travelling on Jamaica Urban Transit Company (JUTC) buses.

This will be facilitated through the installation of mobile gateway devices on approximately 450 buses to provide Wi-Fi connectivity.

The devices will create a Vehicle Area Network (VAN) that enables commuters to access LTE/4G service inside and immediately outside the buses. This facility will be able to accommodate up to 100 mobile devices per vehicle.

The mobile gateways will be remotely managed and are deemed sturdy enough to withstand the buses’ rigorous movements.

They will also feature backup batteries that will be activated in the event that technical issues arising interrupt the vehicles’ power supply.

In addition, there will be constant monitoring to prevent the streaming of explicit content.

An agreement formalising this arrangement was signed at the Science, Energy and Technology Ministry in New Kingston on March 7.

In his remarks, Dr. Wheatley said the partnership supports the Government’s mandate of increasing Internet connectivity islandwide and building a truly knowledge-based society.

He noted the initiative complements engagements such as the Tablets in Schools Programme, zero-rating of all government websites, and the provision of community access points (CAPs) across Jamaica.

The Minister said 300 CAPs are now in operation and five public Wi-Fi spaces established in Kingston and St. Andrew, Manchester, and St. Elizabeth have been commissioned into service.

“We are still looking to go into other rural town centres, such as Annotto Bay, Port Antonio and Brown’s Town,” he indicated.

For his part, Mr. Abrahams said the Wi-Fi service is expected to increase the JUTC’s ridership in the Kingston Metropolitan Transport Region (KMTR) and contribute to boosting the company’s revenue. 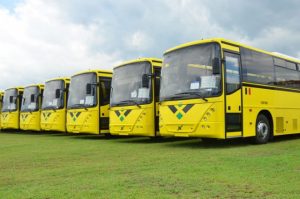 “This service will allow all passengers with a smartphone to have access to basic Internet connection (so they can) browse, check, send emails and access WhatsApp (messaging). This is at no cost to the commuter, no cost to the JUTC,” he said.

In his remarks, Mr. Lawrence said Growth Tech Limited’s vision is to eventually see data service manifested in Jamaica like oxygen, accessible to everyone, everywhere.

He said a “sizeable number” of Jamaicans who travel on JUTC own smartphones, but are unable to leverage data service on the go as much as they desire.

“Our platform provides an exclusive communication bridge between business entities of any size and thousands of commuters, prospective commuters, travelling on the JUTC on a daily basis, as products and services will be presented in the form of mobile advertisements when connecting to the Wi-Fi,” he said.

Mr. Lawrence said a pilot will be implemented prior to the full roll-out by the end of the year.

Growth Tech Limited is a technological company that was conceptualised in 2016. The entity was formalised in 2017 with the goal of installing Wi-Fi services in public transportation units as well as high-traffic locations.