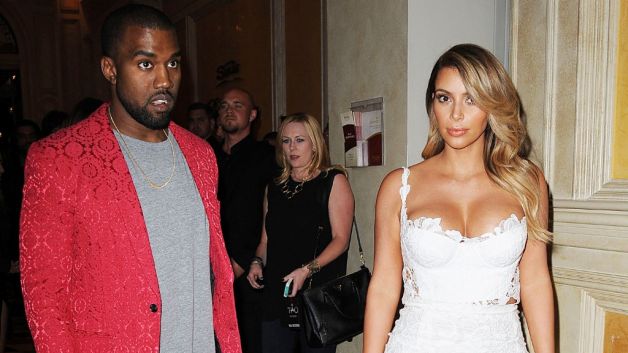 West, 36, proposed to Kardashian, 33, last week and hasn’t had much time to think of wedding details, but he does have two words on the brain thus far: “Fighter jets,” he said.

And fighter jets he just might get. In a separate interview during her weekend birthday celebration, Kardashian bowed to her soon-to-be-hubby’s creative mind, telling People.com that the ceremony would be “whatever he wants.”

‘Ye also answered one of the biggest questions about his wedding. Describing his relationship with the relality star as “the perfect balance,” he said that there’s no current deal to televise his wedding, but he may consider one and donate the paycheck to charity. “I would take as much as possible, if somebody’s gonna pay me to broadcast it,” he said, adding, “People got all these perceptions of what they think makes something official or non-official. What’s official is some bills.” Besides, he said in all-too-serious jest, “Me and Kim are in the exploitation business.”

But ‘Ye still draws the line at being antagonized by the parparazzi. “I should be respected to the highest extent for what I’ve been able to accomplish at this age,” he said, using Big Sean and John Legend as examples of how his influence makes stars become more visible; citing Rihanna, who he said was “just a pop star” before his help; and throwing in, “the fact that I wrote a song called ‘Find Your Love’ that I gave to Drake.

“I should be respected,” he said again. “And anyone disrespecting me should be checked. Period.”

Also in the interview, West freestyled, named Drizzy, Kendrick Lamar and Pusha T among his favorite rappers, and encouraged others to “take one percent” of his confidence level and “add that to your every day.”

Not to be the one to confuse confidence with cockiness, however, ‘Ye gave one other detail about his wedding. He said, getting married won’t be about a “wow-factor” per se. “It’s no surprises. It’s just about me doing it in the right way.”

For the original report go to http://www.bet.com/news/music/2013/10/28/kanye-west-reveals-wedding-plans.html