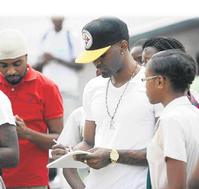 Though revealing that he himself cannot “even walk fast” anymore, let alone to play a sport, Konshens is an avid follower of local schoolboy football, of course ‘repping’ the green and yellow of Excelsior High.

“Green and yellow inna mi vein, everybody know how dah supm yah go, it’s like a family thing, yuh cyan get it out a yuh,” Konshens expressed.

The This Means Money deejay would love to see more past student involvement at the school in keeping with the likes of Kingston College and Calabar and is in talks with cricketing superstar Chris Gayle, who is also a past student, to see what they can do for the Mountain View Avenue-based institution.

look to the future

“It ago change right now, because yuh have people like me and Chris Gayle weh inna talks right now fi come do things specifically fi dis school,” Konshens shared. “Especially the sporting aspect of it, so wi a look to the future now; wi have plans.”

Excelsior currently lies third in Group B on goal difference with 10 points from five games, as they seek an eighth hold on the Manning Cup trophy having last captured it in 2004.

“Mi just reach back a Jamaica and a look weh a gwaan,” Konshens explained when asked what he thought of the Leebert Halliman-coached team’s chances of going all the way this season. “Dem waan settle and knock it (the football) likkle more, but a Halliman a di coach still, so mi know dem soon find dem self.”

Despite appearing adept at analysing what the team needs to do, Konshens does not currently play a sport himself.

“Use to; right now mi cyan even walk fast,” Konshens revealed. “Use to play basket, football, everything.”

The Barcelona fan does, however, attend as many of Excelsior’s matches as he finds possible.

“I wouldn’t say I follow local football on a whole, but Manning Cup and the Colts; on the school level.”

The artiste, who broke on to the music scene in 2005 with hit single Winner, has been touring extensively. His most recent stops were Africa, United Kingdom and New York.

Konz 876 is the artiste’s new shoes line which was launched in Jamaica recently with another launching set for the Bahamas this weekend.

“Wi have a show in Bahamas and wi a tie it into the shoe line and do a thing specially fi ova deh,” he said.

For the original report go to http://jamaica-star.com/thestar/20130924/ent/ent2.html