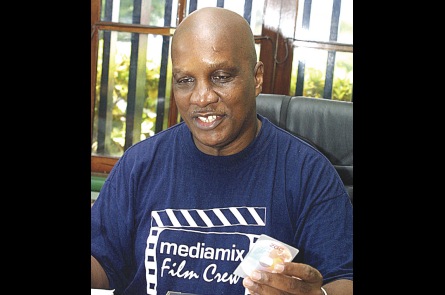 REX — The Renaissance Man, a documentary on the life of cultural icon Rex Nettleford, premieres at The Carib cinema in St Andrew, on Thursday.

It will be presented by the Rex Nettleford Foundation, part funders of the project.

The 45-minute flick, conceptualised and directed by film-maker Lennie Little-White, will also have a screening in St James on October 3.

Little-White, however, views the occasion with mixed emotions. The director is pleased his production will be shown to the public, but feels slighted as he only learned of the premiere through the media.

“I read of the premiere last week in a newspaper advert. I have not even received an invitation to the event and that is very embarrassing,” the film-maker told The Sunday Observer.

Added to Little-White’s uneasiness is the fact he relied heavily on other persons for resource material, some of whom asked him for tickets.

“People who have significantly contributed to the film and who are in the film have been calling me and asking me for an invitation. You can’t ‘diss’ people like this,” he continued.

Among those who contributed to the project are: photographer Maria La Yacona, who documented Nettleford’s career as a dancer for over 40 years; Dr John Minott, who also contributed photos; Jon Williams, who composed the original music; and television host Adrian Atkinson, who did the narration.

“None of them was invited to my knowledge,” he said.

Little-White, an executive producer of the popular television series Royal Palm Estate and its offshoot The Blackburns of Royal Palm Estate, is the director of Children of Babylon (1978) and Glory to Gloriana (2006).

He said the Nettleford project was long in the making.

“I met Nettleford in 1972. I came up with the concept in 2003. I sat with Nettleford and discussed it with him. He liked the idea for the film and I got his approval in writing,” he said.

The director received funding from the Nettleford Foundation as well as the United States-based Reed Foundation. Shooting began in May, 2011.

Nettleford, who was born in Trelawny in 1933, left a rich legacy in the arts and academia. He co-founded the National Dance Theatre Company, which celebrated its 50th anniversary last year. Nettleford died in February, 2010 while attending a conference in Washington DC.

Quizzed as to what he would change in the film, Little-White had plenty to say.

“The film, to me, focuses too much on Rex the academic. There is nothing about his family. The foundation wanted a film looking at him as an academic. A lot of what we put in were taken out and we didn’t put anything in there that was controversial. They even cut back on the dancing… they preferred folk dancing,” he said.

Little-White, however, said he is currently making another Nettleford film — Long Live The King — which he intends to distribute via YouTube and Facebook.

“I’m funding this project by myself. My film will be more rounded and I won’t use anyone that’s in the previous film,” he said.

The director expects the film to be completed in four weeks.

Efforts to get a response from the Nettleford Foundation were unsuccessful.

For the original report go to http://www.jamaicaobserver.com/entertainment/LENNIE-S-DILEMMA_15111436