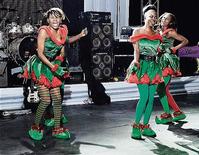 Santa's elves were bubbly on stage at the LIME Christmas Mission roadshow.

Santa’s elves were bubbly on stage at the LIME Christmas Mission roadshow.

Savanna-la-Mar buzzed with excitement on Saturday when the LIME Christmas Mission roadshow rolled through the Manning’s High School.

The town, which has never experienced an event of such magnitude, had a turnout of over 10,000 patrons from various age groups. Patrons were allowed to enter the show after topping up with $200 LIME mobile credit.

The live performance of the event featured Konshens, Tosh and Sizzla. The audience loved Konshens, who gave a remarkable performance. He left his place on stage twice to go into the raving crowd to better interact with his supporters. Everyone wanted a

Newcomer Tosh was in perfect form at the event.

piece of him, his performance was great and he continues to demonstrate why he is the best at what he does.

Miami-based singer Tosh also gave an amazing performance. It was the first local performance of this kind for her, and she sought to grab and maintain the audience attention throughout.

Konshens and Tosh also performed their new hit single, What a Time, which had the crowd going wild.

Sizzla’s performance was consistent as he ripped the stage with lyrical songs that excited the crowd.

Telecommunications giant LIME gave away $100,000 in cash on spot through its money machine. This further excited the already exhilarated crowd.

In addition, lucky patrons also went home with Konz876 shoes all courtesy of Konshens from his shoe line. This giveaway was incited by comedian and emcee Ludlow ‘Pretty Boy Floyd’ Peynado.

“LIME is all about giving back! From our newly renovated state-of-the art store in Kingston and many more to come, to now all these roadshows. We really want to give our customers a wonderful

Comedic duo Ity and Fancy Cat were in their element.

experience when shopping with us and give them an opportunity to win great prizes from now until Christmas,” Carlo Redwood, VP of Marketing at LIME, said.

The LIME Christmas Mission started November 1 and will run to December 24, with $1million in cash to be won.

Dancehall impresario Sizzla wooed the crowd with his endless hits.

For the original report go to http://jamaica-star.com/thestar/20131206/ent/ent9.html