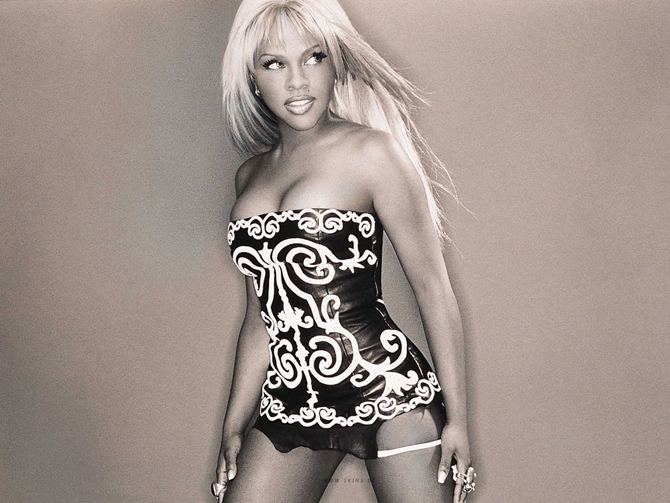 Lil Kim is always making moves. The 39-year-old rapstress appeared alongside her new artist Tiffany Foxx to body their cypher performance at this year’s BET Hip-Hop Awards. Then, Kimmy Blanco made history at Power 105.1’s Powerhouse 2013 when Kendrick Lamar brought her out and unified the king and queen of New York hip-hop. She’s also busy working on her new mixtape Hard Core 2k13, a follow-up to her double platinum debut album, Hard Core. But it’s not like Kim is all work and no play—she’s been having fun hanging out with her new pal Miley Cyrus, too. While Kim was on her way to rehearsal for her gig at O1NE Yas Island, XXL got the scoop on her relationship with Miley, the documentary she’s planning to release, and where she stands in hip-hop today.

“Nowadays, it’s just females are jealous. And they want to act like the girl who is responsible for all this doesn’t exist.”

How did you end up meeting Miley Cyrus?
She was in [Tiffany Foxx’s “Twisted”] video with me almost a year ago. We were always Twitter friends and when we saw each other out, we would always show each other love, but we came even closer. She texts me a lot when she’s about to do something. [When] we around in the same place, we always call each other and text each other and we be talking. She’s like, “I got a surprise for you for Halloween!” She dressed up as me and it was the best. I loved it. I thought it was f**king awesome.

You’ve said in past interviews that Tiffany Foxx is a boss just like you. How do you keep each other motivated?
I mean I don’t know about any other chicks, but a boss bitch love to be around another boss b**ch. I don’t want to just be around somebody that I can teach. I want to be around somebody [who] I can learn something from too. That’s where a lot of these chicks go wrong. At the end of the day, we [are] riding with each other. That’s how it should be. I’m pretty sure Rick Ross, Jay Z and French Montana, they all rock with each other, but they all bosses at the same time.

“I definitely see myself as the queen. I am the one who made it possible for females to be sexy. That’s just the bottom line.”

Do you still think women in hip-hop are struggling to find their collective voice?
Yeah, definitely, because you have other women out there who want to be by themselves. They don’t get the art of unity and what inspired that. You can’t come in the game and think, “Oh, okay, I’m going to be the only one out here. I don’t want to stand in the line with no other chicks.” It’s still a struggle because when a woman makes it to the top, it wasn’t like that when we were out. When we made it to the top, the real divas—me, Missy, Eve—we had no problem standing in a line. Look, let’s get this money. We did songs together. We just kept continuously doing it even when we didn’t like each other. We did photo shoots even when we couldn’t stand each other. It was more real. Nowadays, it’s just females are jealous. And they want to act like the girl who is responsible for all this doesn’t exist. That’s whack. That’s real corny, but things will change. That’s the one thing for certain—two things for sure. Things will change.

You are planning on dropping a documentary. Is that still coming out?
Yeah, we’re still working on it. I have a book coming out so I am trying to figure out if I want to drop it around the time the book drops or first quarter. It’s focusing on everything. I can’t even tell you one specific thing. It’s everything. It’s whatever is going on that day. [Laughs]

What do you think is the biggest misconception of Lil Kim?
I can’t really say because I don’t really care what people think no more. It’s hard. The one thing that made me so great before is I just did what the f**k I do. I didn’t care how I did it. I did it for my fans at the same time, but I also did it for me. That’s what my fans love because I did me. I told them the story about me and my life. I made sexual music that was fun and just people loved to sing to. I don’t really care no more. It’s whatever now.

With hip-hop turning 40 this year, where do you see yourself stand?
I am definitely the queen. I definitely see myself as the queen. I am the one who made it possible for females to be sexy. That’s just the bottom line. And [I] still rap hard with the fellas. Period.

For the original report go to http://www.xxlmag.com/news/2013/12/lil-kim-doesnt-care-what-anyone-thinks/