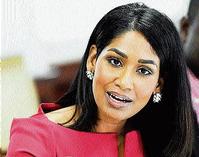 The Ministry of Youth and Culture on Thursday launched the pilot phase of the Culture Card programme at the National Gallery in Kingston.

The launch of the Culture Card initiative, which is in keeping with announcements made by Minister Lisa Hanna in her Sectoral Debate presentation in June of this year, is set to expose hundreds of young people across the island to both the tangible and intangible aspects of the Jamaican culture by granting them access to institutions and organisations that are paramount to the retention and continuation of our country’s legacy and that of its people.

Speaking at the launch, Minister Hanna said that the initiative is a direct response by the Ministry to the deficit in cultural appreciation and understanding by our children and youth.

The minister added that while the rest of the world is taking great advantage of their cultural experiences and are gaining, Jamaica has, for a number of years, failed to capitalise on such ventures. This, she says, will only be made different, when there is greater appreciation of our cultural experiences.

“So we asked four schools to select 25 students each – five from each grade – with a mix of criteria, including students with a definite interest in culture; students who have not shown any particular inclination towards culture; as well as students who are excelling in academics for whom culture cards are offered as incentives,” Minister Hanna explained.

During the first phase of the programme, which will run for two school terms, 100 students from Haile Selassie, Papine, St Andrew Technical and Vauxhall high schools, along with their parents/caregivers will be issued cards. These cards will allow them access to museums, galleries, heritage sites and exhibitions, and productions by private arts and culture companies.

The participants will also be afforded the opportunity to be involved in activities at the Edna Manley College of the Visual and Performing Arts through the Ministry of Education.

Principal director of culture at the Culture Ministry, Dahlia Harris, highlighted that young people’s reactions are often times a result of the things they are exposed to, adding that, allowing them greater access to cultural offerings will help to reshape their thinking.

“The Culture Card will encourage them [youth] to ‘reset di ting’. But in order to have the courage to do things differently, we also have to give them the knowledge to approach things differently and that is what it will do,” she added.

The students received their first tour of the National Gallery as part of the initiative. At the end of the pilot phase of the programme, the ministry will conduct an assessment to determine the impact the experience would have had on the children and their parents. The minister encouraged the students to be open and honest in their own assessment of the programme, as the ministry remains committed to creating youth friendly programmes with a national impact.