Tupac Musical Heads To Broadway In 2014 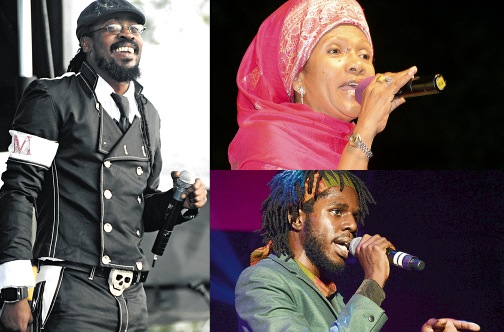 MARCIA Griffiths, Chronixx, Chalice and Moses Davis, who performs under the stage name Beenie Man, will add a tasty mix of sweet reggae to this year’s staging of the Jamaica Jazz and Blues Festival.

Griffiths, regarded by many as the queen of reggae, will celebrate her 50th anniversary in the music industry with a special performance that will feature appearances by Bob Andy, Judy Mowatt, Freddie McGregor, Tony Greigg and Chris Martin.

Griffiths has established herself as a formidable solo act, but was, for many years, a member of the famous all female trio the I Three, singing back-up for Bob Marley & the Wailers.

Reggae revival advocate Chronixx has brought a freshness to the music in recent times with a string of hits, among them Smile Jamaica, Behind Curtain, Odd Ras and They Don’t Know Chronixx.

He has steadily improved his craft and his latest hits include Here Comes Trouble and Me Alright, with Kabaka Pyramid.

Beenie Man, easily one of Jamaica’s finest dancehall performers, will take the festival stage through an entirely different lens, as the Grammy-Award winning deejay will be performing under the theme ‘The Other Side of Moses Davis’.

Upcoming sensation Protoje will also appear on the festival, which is sponsored by the Jamaica Tourist Board, Consumer Brands Ltd, Seaboard Marine, Knutsford Express, the Jamaica Observer, Courts and Intelligent Multimedia.

For the original report go to http://www.jamaicaobserver.com/entertainment/Marcia-Griffiths–Chronixx–Beenie-Man-join-Jazz-and-Blues-line-up_15754236