May is a significant month as it relates to workers and workers struggle for a just wage, humane working conditions and a safe work Environment.  In 1889 there was a designation that May 1st be declared Workers Day or  International Labour Day.

Jamaica celebrates May 23 each year as Labour Day. In around 1938 there were various labour riots and demonstrations in Jamaica on the sugar plantations around Westmoreland.   It was out of these unrest that led to the birth of the Modern Labour Movement. Trade Unions were formed then and workers were organized. The movement led also to political parties being formed. The People’s National Party (PNP) under the leadership of Norman Manley was the first and then Sir Alexander Bustamante broke away and formed the Jamaica Labour Party (JLP).  Other countries celebrates different dates in May across the world. Some have public holidays for the day. 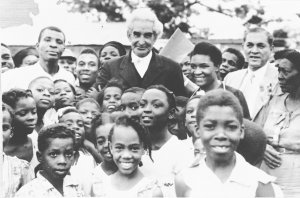 The National Worker’s Union (NWU) was formed before the political party PNP.  The Bustamante Industrial Trade Union (BITU) also came after the JLP.  So we owe a lot to the Labour Movement for the improvement in Labour Relations and other up-to-date labour related advancements. For example Maternity Leave and now Paternity Leave are more recent initiatives that have being introduced.

Prior to this mothers were dismissed when they got pregnant or had to have their baby and rush back to work.  Most were not paid for this maternity leave period.

The law allows for at least two (2) month’s leave with pay after a certain length of service with the employer.  This is a piece of social legislation now in the Jamaican law. Michael Manley made that law possible as he was a Trade Unionist before he became PM in Jamaica in 1972.

We congratulate the past labour leaders for improving the working conditions of the working class.  We congratulate Sir. Alexander Bustamante and other people like St. William Grant and AGS Combs to name a few of the early labour personnel. The planter class, owners of capital and captains of the industry were bitterly opposed to the workers’ organizing a union.  Even today some major corporations like KFC, Burger King and Amazon strongly oppose their workers from becoming unionized.

It is lawful to become unionized in Jamaica.  Some employees are forced to sign employment contracts which would make them not eligible to be unionized.

We hope these Anti-Union practices will one day be outlawed, which is a disgraceful practice.

Hopeton O’Connor-Dennie is a poet and social activities. He was a former union delegate in the telecommunications industry.