Mayor of Montego Bay, Councillor Homer Davis (right), accepting the ceremonial torch, from torch bearer, Rodney Green, as Traffe Samuels (left) looks on during the ‘Flames of Freedom’ celebration at the historic Sam Sharpe Square in Montego Bay, St. James, on Friday, December 27. The event was held to commemorate the 188th anniversary of the 1831 Christmas Rebellion.

Mayor of Montego Bay, Councillor Homer Davis, is urging Jamaicans, to be more appreciative of the legacy left by National Hero, the Right Excellent Samuel Sharpe.

He said the freedom that the country enjoys today is due to the efforts of Sam Sharpe’s fight for liberty, during the Christmas Rebellion of 1831. 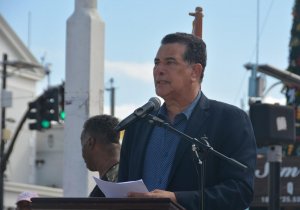 Mayor of Montego Bay, Councillor Homer Davis, speaking at the ‘Flames of Freedom’ celebration held at Sam Sharpe Square in Montego Bay, St. James, on Friday, December 27, to commemorate the 188th anniversary of the 1831 Christmas Rebellion.

“I want us to spare a moment and reflect on what ‘Daddy Sharpe’ did in 1831 through a slave rebellion which led to Jamaica becoming a free nation,” Mayor Davis said.

“Our ancestors suffered a lot as they paved the way for us to be living as free Jamaicans with rights, which we sometimes take for granted while other people in other parts of the world continue only to dream of having these rights,” he added.

He was addressing the ‘Flames of Freedom’ celebration at the historic Sam Sharpe Square in Montego Bay on Friday (December 27) commemorating the 188th anniversary of the Christmas Rebellion.

The Mayor, who is also the Chairman of the St. James Municipal Corporation, further noted that he is optimistic about the prospects of reparation for the injustices suffered by Jamaica’s forefathers, particularly those who resided in Kensington and adjoining districts in St. James, where the rebellion started.

“Today’s event brings into sharp focus the efforts of our present day leaders as we continue the fight to bring closure and indeed justice for Jamaica in relation to our ancestors being victims of colonialism and slavery,” Mr. Davis stated.

“This is yet another giant step for the parish of St. James and Jamaica on a whole as we seek to right the wrongs which were done to our ancestors,” he added.

About 200 youngsters from Stonehenge, Catadupa, Cambridge, Plantation, Montpelier and Roehampton in the parish participated in the day’s celebration that included the iconic Torch Run.

The Run started at Catadupa (birthplace of Sam Sharpe) and made its way to the various communities before arriving at Sam Sharpe Square, where the torch was handed to Mayor Davis.

He returned the torch to the runners and they headed towards Kensington to signal the start of a civic ceremony and concert.

It is documented that the burning of a trash house of the Tulloch Castle Estate and the subsequent burning of Kensington Great House signalled the start of the rebellion.

The flames and smoke were visible for miles, and sparked responses from slaves across 40 plantations in St. James, Trelawny, Hanover, Westmoreland and St. Elizabeth.

The rebellion involved some 50,000 slaves and the inquisition that followed resulted in the execution of approximately 500 slaves, including Sam Sharpe.

The 1831 rebellion helped to influence the abolition of slavery and the push for full emancipation, which came on August 1, 1838.