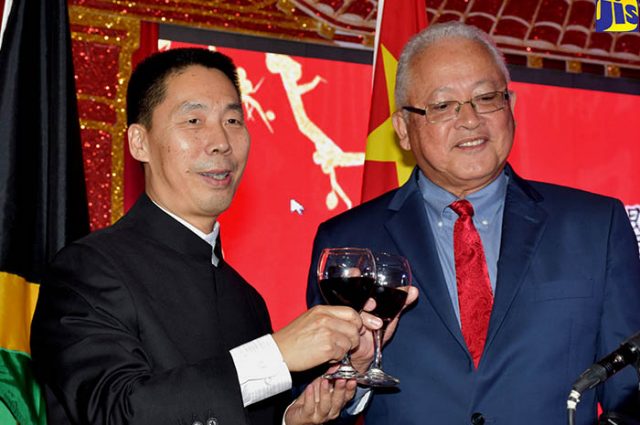 Minister of Justice, Hon. Delroy Chuck (right) and outgoing Chinese Ambassador to Jamaica, His Excellency Niu Qingbao, share a toast, at a reception held on Friday (February 16) at the Jamaica Pegasus Hotel in New Kingston to observe the Chinese New Year and to bid farewell to the Ambassador.

Minister of Justice, Hon. Delroy Chuck, has commended outgoing Ambassador of the People’s Republic of China, His Excellency Niu Qingbao, for the tremendous role he has played in raising the profile of bilateral relations between the countries and securing meaningful cooperation to positively impact the lives of Jamaicans.

He was speaking at a reception held on Friday (February 16) at the Jamaica Pegasus Hotel in New Kingston, to recognize the first day of the Chinese New Year and to bid farewell to the Ambassador, whose tour of duty ends this month.

“It is with mixed feelings that we join in these festivities while at the same time bidding farewell to a true friend of Jamaica, who has truly endeared himself to the government and people of Jamaica as well as his colleagues in the diplomatic community,” Minister Chuck said.

He praised the Ambassador for successfully accomplishing his tasks of prioritizing high level exchanges and advancing the China/Jamaica friendly partnership for common development.

He noted that progress has been made on several projects during the Ambassador’s tenure, including the building of early childhood institutions; the new Ministry of Foreign Affairs and Foreign Trade office building downtown Kingston; the Confucius Institute project at the University of the West Indies; the western Jamaica children’s hospital project; and technical cooperation to improve coaching in synchronised swimming, badminton and other sports.

“The Caribbean Maritime (University) and the GC Foster College have benefitted from your deep commitment. Your parting gift may be the recent Chinese investment of US$6 billion to develop an industrial park and special economic zone alongside the JISCO/Alpart operations in Nain, St Elizabeth,” he said further.

The Justice Minister, in the meantime, applauded the economic performance of the People’s Republic of China, noting that it has been the world’s fastest growing economy with real annual gross domestic product growth averaging 9.5 per cent in 2017, a pace described by the World Bank as the fastest sustained expansion by a major economy in history.

He added that China’s economic performance lifted an average of 13.9 million people out of poverty each year between 2012 and 2016.

As an international player, Mr. Chuck said the country has been leading efforts to implement the United Nations 2030 Agenda for Sustainable Development and the Paris Agreement on Climate Change.

“These are global issues of high priority for Jamaica and fellow Small Island Developing States,” he pointed out.

In his remarks, Ambassador Qingbao said his tour of duty in Jamaica has been “extremely precious and rewarding” and thanked Jamaica for its “friendship and support”.

“No matter where I go, I will always care about (Jamaica) and will continue to contribute as much as I can to China/Jamaica relations,” the Ambassador pledged.