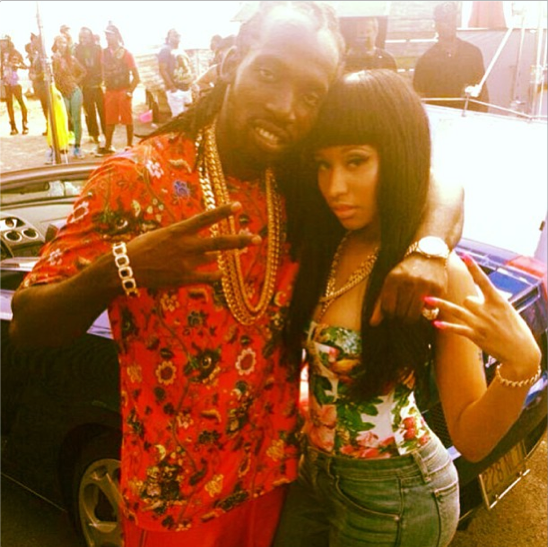 Reggae/dancehall production crew JAB Production comprised of Patrick ‘Roach’ Samuels and Justus Arison are expecting great returns from the attention that American artistes Drake, Birdman, DJ Khaled and Rihanna are giving to their ‘Overdrive’ rhythm, especially the single Give It All To Me which features Nicki Minaj.

According to Arison, who was in New York during the video shoot for Give It All To Me, the project signals a return of dancehall to the American market.

The producer disclosed that the ‘Overdrive’ rhythm was submitted to the Young Money/Cash Money teams and Nicki Minaj recorded a day later. He believes this interest by the international labels is important to the product (dancehall).

In addition to that, Arison says Birdman, Drake and Rihanna have all tweeted endorsements about Give It All To Me. He also feels that the rush to film the accompanying music video is testimony to the fact that Cash Money and Young Money believe the dancehall song has potential.

Hip-hop-based radio stations Hot 97 and 99 Jamms have also added the song to their respective playlists. However, the amount of airplay received by the song on these stations has also raised an eyebrow from Arison, who described the experience as overwhelming.

“When the song was premiered on Hot 97 it was pulled up about 10 times. Rihanna even tweeted a line from the song saying that Caribbean girls run things. It’s just a good look for dancehall because all those top artistes are tweeting about it,” he continued.

“They know the impact that the ‘Overproof’ rhythm had and this is the third and last instalment called ‘The Overdrive’. We are definitely going to go overboard to promote this one. I am trying to make it bigger for dancehall, and I have some of my work from JA Productions with me over here which is straight dancehall right now to spread,” Arison said.

The ‘Overproof’ rhythm itself earned international attention when R&B singer Daniel Beddingfield recorded a song on it called Sometimes You Just Know.

Arison believes the attention the ‘Overdrive’ rhythm suggests it could be just as successful as the ‘Overproof’ rhythm or become an even more prominent production.

“This means big things for us. It’s an honour because Cash Money, Young Money, Birdman and Drake have all been dropping classics. So it’s an honour for people who have accomplished so much recognising dancehall through our work,” he said.

Roach also commented on ‘Overdrive’ rhythm’s early successes, saying it has crossover potential. He believes that following the release of the music video, the ‘Overdrive’ rhythm will be a popular selection on every instrument which plays music.

For the original report go to http://jamaica-star.com/thestar/20130902/ent/ent1.html