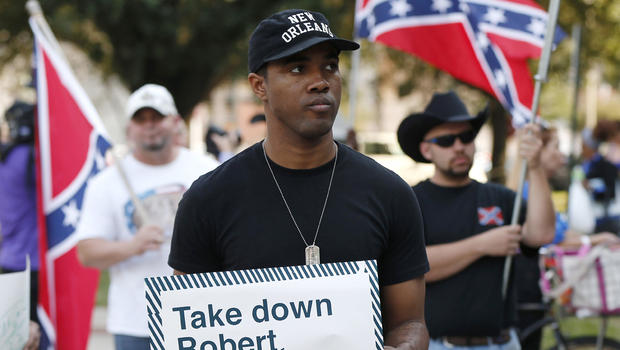 New Orleans, USA: This is a predominantly black community and as such no one would expect them to have any problems removing symbols of racism and or white supremacy. The city council has voted democratically regarding the removal of the offending monuments … so what is the issue? To not remove such symbols and monuments would be akin to an abomination.

The Council it should be noted, was democratically elected and the rule of law should be respected. This is supposed to be the United States of America where they pride themselves in the rule of law and respect for constituted authority.

It is scandalous to say the least that a contractor cannot be found to carry out the legal authority of the duly elected City Council. This is not some banana republic known to be run by some despot or war Lord who has no regard for the rule of law.

In the Ivory Coast, under President Laurent Gbagdo et al they refused to respect the will of the people and by extension the rule of law. Men with guns ruled … the barrel of a gun stands supreme. The rule of law is outlawed and thugs use force to impose their will on the masses. They even incite rebels to subvert the constituted authority and hijack the democratic process.

This type of breakdown is not expected in the USA and should not be allowed to take root in the world’s top democracy. The highest democratic traditions are expected as they always put themselves up as the beacon for such way of life. Like a lighthouse guiding at lost sailor, on a storm raged bitingly cold winter’s night. It is probably perceived that because some low level predominantly black people live there then there is no need to use the full resources of the Federal law enforcement apparatus to ensure the rule of law stands.

In my perspective, shame on you Americans, you must always lead by example … you have come too far, too much blood, sweat and tears have been shed and spilled to achieve your gains at democracy to turn back … you cannot turn back now.

This madness must be stopped without delay …

You will recall that nine blacks were murdered in June 2015, at a known black church … these were peaceful folks worshipping their God. In South Carolina those offending symbols have since been removed … including the Confederate Flag from the State House grounds … weeks after that bloody, atrocious and senseless attack.

We say take them down and destroy them.

This is not rewriting history, but restoring dignity to an oppressed people whose only crime is the colour of their skin. Racism and racial segregation in any shape or form is an affront to decency. There is no super race … Hitler was wrong to ever thought thus … much less to have acted and exterminated Jews.

Take down those symbols of racism and white supremacy …

It is my further perspective … let us right any wrong of the past. It is the only right thing to do. Isn’t it not?