More than $697 Million Allocated for Promotion of Sports

Prime Minister Says Culture of Disorder Must be Changed 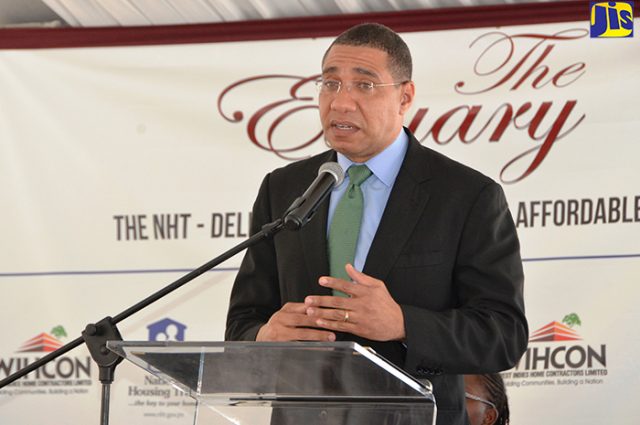 Photo: Prime Minister, the Most Hon. Andrew Holness, addresses ground-breaking ceremony for the building of 1,500 housing units in St. James, on February 24.

Prime Minister, the Most Hon. Andrew Holness, says the Government remains unrelenting in its push to change the culture of disorder in the country.

The Prime Minister said the culture of disorder extends to citizens who conduct themselves and their affairs contrary to the terms and conditions that were agreed on when they do things, such as the purchasing of housing units.

“What I fear when we build these housing developments, is that people will come in, who have the ambition and want to make their home their castle, and there are others who will come in, who have no such ambition, and the value that you are trying to create in your house is going to be destroyed by those people who do not appreciate the value they have in their house,” he said.

Mr. Holness noted that the Government will be playing a much greater role in guarding against the setting up of illegal garages and other operations in housing developments by persons who seek to depreciate the value of the homes of others.

“Let us be clear about it. When these housing developments are built, we are not going to leave it up to you to determine the value it reaches. So, when you come and buy these houses, be prepared to maintain the highest standard to ensure that the property value can rise, because that is part of the prosperity agenda,” he said.

The Prime Minister pointed out that the aim of ensuring that homeowners stick to the agreement that they sign with the developers is to ensure that Jamaica becomes an orderly society.

Meanwhile, Mr. Holness is urging the National Housing Trust (NHT) to start a programme of going back to housing schemes that were built many years ago and undertake projects aimed at community development.

The Estuary housing development, which is being done at a cost of $7 billion, is expected to be completed by 2019. It is aimed at low- and middle-income earners.