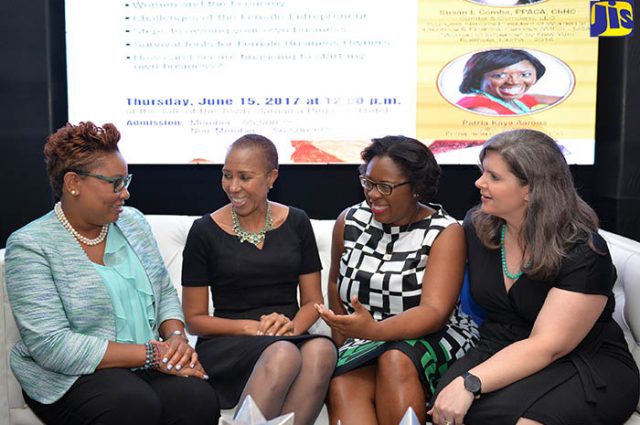 The Government is to undertake a public education campaign on the National Financial Inclusion Strategy (NFIS).

State Minister in the Ministry of Finance and the Public Service, Hon. Fayval Williams, said the campaign will raise awareness among entrepreneurs of the steps needed to regularise their enterprises and access assistance from financial institutions.

She was speaking in an interview with JIS News at the American Chamber of Commerce (AMCHAM) Jamaica Female Entrepreneurship lunch forum at The Jamaica Pegasus hotel on Thursday (June 15).

The NFIS, launched in March, aims to improve the country’s financial system by 2020.

The goal of the NFIS is to create the conditions in which Jamaicans, particularly those who were previously underserved by the domestic financial system, are able to save safely and build up resilience against financial shocks, and firms are able to invest, grow and generate greater levels of wealth.

“The real work begins in terms of putting in place all those initiatives that will facilitate access to finance. Right now, I know there are small businesses that use the microfinance companies. We want to see those companies grow to the next stage and be able to access the more formal banking system, but it requires education in some instances,” Mrs. Williams said.

Speaking at the official launch, Minister of Finance and the Public Service, Hon. Audley Shaw, noted that one of the objectives of the strategy is to increase the percentage of total private-sector credit extended to micro, small and medium-sized enterprises (MSMEs) to 11 per cent.

The AMCHAM Jamaica forum, under the theme ‘Female Entrepreneurship… an Enormous Economic Force’, provided useful advice and tips for female entrepreneurs who own or plan to own a business.

The event was part of the AMCHAM Leadership Series, which explores topics in great depth to provide insight, information and useful advice to AMCHAM member companies.

AMCHAM is a non-profit organisation and independent association formed in 1986 by United States (US) business people and Jamaicans who do business with the US.

The main objective of the Chamber is to promote investment and trade between Jamaica, the US, the region, and around the world.