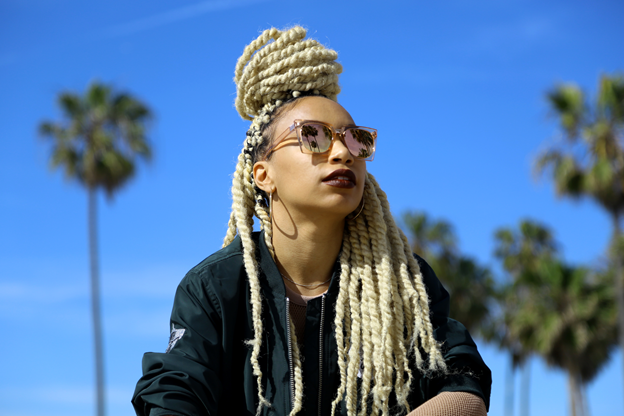 The beauty of independence is bliss. This do-it-yourself narrative of  a l l i e, the singer and songwriter from Toronto, Canada, is empowered by personal and creative freedom on her new album Nightshade. The self-released debut LP, out July 21, is a 10-track opus of soulful introspection. Her voice has the “lush tactility of suede,” according to Pitchfork. And last year, Red Bull described her songs as “sensual lullabies with the slow-motion beauty of low-gravity movement.”

While a l l i e blazes a new trail for Toronto’s futuristic soul and R&B, her subject matter covers relatable themes that occur in familiar sequences such as falling in love, heartbreak, leading to reflection then resurrection. Nightshade treads through the deep space of a l l i e’s encounters where time seems non-existent.  On the album’s lead single “Bad Habits,” which drops July 7, a l l i e paints a picture of a scene where she is overwhelmed by the pressure of performing for an audience that only sees her as eye candy. Alcohol, the “bad habit” in this case, aids as an escape and drowns out the noise. On the River Tibre produced “Take Me There,” alongside Toronto stand-out Charlotte Day Wilson, she skillfully sets a mood of an unforgettable moment where making the first move is an addictive memory, worthy of rewinding. Her sensual vocal tone throughout the album is intoxicating, easily relaxing to the listener.

a l l i e calls on production by Harrison, 2nd Son, River Tibre, The Kount, Birthday Boy, Sunclef (Soulection), and Middle East. Chord progression and plush drum programming create a comfortable backdrop. “Wildcat,” produced by 2nd Son and The Kount, manifests the synth chord blueprint. The gentle slow jam savors the feeling of being subdued. 2nd Son and The Kount also produced the stuttery-bounce of “Move Like A Mystic,”  on which a l l i e shows her versatility by rapping over the beat. 2nd Son’s production also backed her first EP, Strange Creature. Her second EP, Moonlust (2015), was well-received; Complex called the project “meditative and therapeutic…supplying an ambient dreamscape filled with elastic grooves and melodies.”

In 2015, a l l i e was selected to be a part of the Red Bull Sound Select program, the curated platform for unique artists to release songs through Red Bull and perform at the company’s sponsored events, which included sharing the stage with international acts such as SZA, Kelela, and Tink. a l l i e was raised by her mother, and born to a Jamaican-Canadian Juno Award nominated reggae musician father who nurtured her with soul, jazz and reggae music. Toronto’s West End was her home, the downtown part of the city where she was at the center of everything. Maintaining close ties to her hometown, a l l i e has become a fixture in the area’s music community and with the release of her debut album is now able to explore her creative range without limitation.