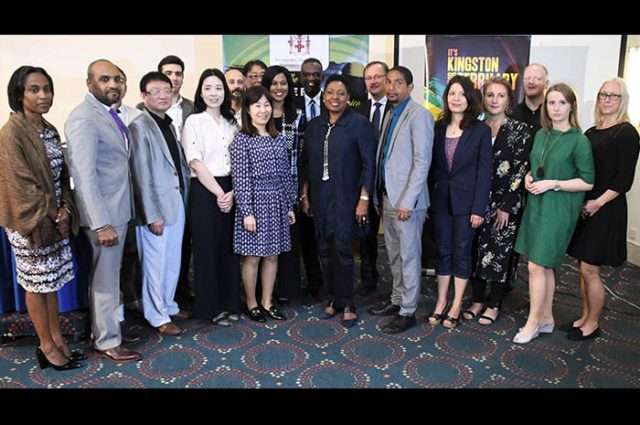 The Honourable Olivia Grange, Minister of Culture, Gender, Entertainment and Sport and Senator Councillor Delroy Williams, Mayor of Kingston (centre) are joined by delegates attending the four-day meeting of the UNESCO Creative Cities of Music Subnetwork taking place at the Jamaica Pegasus.

The Honourable Olivia Grange, Minister of Culture, Gender, Entertainment and Sport has identified Reggae music as Jamaica’s most valuable yet undervalued export.

Miss Grange’s comment came as she addressed the Opening Ceremony of a four-day meeting of the UNESCO Creative City of Music Subnetwork being held at the Jamaica Pegasus.

The Entertainment Minister said the IMF’s World Economic Outlook GDP Estimate for Jamaica was US$14.6 billion of which creative industries represented approximately five per cent or US$730 Million and that music, represents close to two per cent of that total.

“Yet these numbers,” Miss Grange says, “do not tell the full story of Reggae music and its impact on the poor and dispossessed of the city who created six distinct genres of music – Mento, Ska, Dub, Rocksteady, Reggae and Dancehall – within the last 50 years.”

The Minister told the audience which included representatives from nine cities in the UNESCO Creative City of Music Subnetwork, that Reggae music was and has been the soundtrack that creatively conveyed powerful insights into the very heart and soul of Jamaica’s working class and the unemployed.

“Reggae is universal, it is spiritual, it is political,” she said.

Minister Grange said it was fitting therefore that music was behind the Ministry of Culture, Gender, Entertainment and Sport playing host to the first UNESCO Creative Cities of Music Subnetwork in Kingston which was designated a music city in 2015.

She said that the representatives from Adelaide, Amarante, Daegu, Glasgow, Hamamatsu, Hannover, Idanha-a-Nova, Katowice, Norkoping and Kingston meet over the next three days they would give consideration to assistance for those cities in need in the technical areas of cultural mapping, cultural data gathering, and cultural data analysis.

Miss Grange closed by suggesting that, “it may well be music that will solve the world’s crises.”