Mitzy Seaga and children of first marriage pose outside arena 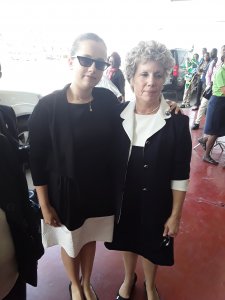 Thousands turned out at the National Arena to show their respects to the late Edward Phillip George Seaga.  Tears flowed as family and friends wept openly. It was a moving experience to witness.

The Seaga family filed past the flag draped casket of Jamaica’s 5th PM as it laid in state at the National Arena in Kingston Jamaica today June 19, 2019.  The army in their no one dress, ceremonial red and JCF officers in white top vests, provided security and added dignity to the proceedings.  With tears flowing down her cheeks Mitzy Seaga .. . Seaga’s first wife visited with her children from her marriage to Seaga.
Current Wife
Carla Seaga and daughter Gabrielle are seen in attached picture filing past Seaga’s casket.  See attached pictures.
Hopeton O’Connor-Dennie SIC Vision Newspaper Canada was there and filed pictures.