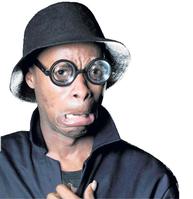 One of the most popular actors in local theatre, Keith ‘Shebada’ Ramsey, will be moving from the stage to take up a spot on TV in a new sitcom, Shebada In Charge. Speaking with THE STAR recently, Ramsey said the sitcom will start airing on CVM TV on October 17. Essentially, he said the sitcom is about him managing his aunt’s business and being clueless about what it means to be an entrepreneur.

“When it starts, I am Shebada. But then, there is a transformation and persons I used to be friends with can’t understand why I don’t talk to them anymore. That’s where the Keith comes in,” he said.

While Ramsey has had much success on stage in plays like Bashment Granny, GhettOut, Shebada Comes To Town, Di Driva and Serious Business, the outspoken actor said he believed it is time to expand his horizon.

“Stage is not my ultimate goal. I want to launch everything so it can launch me on the silver screen. This is going to blow persons’ minds. Now I get to be Keith ‘Shebada’ Ramsey,” he told THE STAR, adding that the sitcom also features Garfield ‘Bad Bwoy Trevor’ Reid.

He noted that the sitcom will be much different from the stage, as “the roles I play on stage involve stage acting.”

In the sitcom, however, he said he will be more contained and use less gesticulation, as well as tone down his voice.

Despite the differences, he said there is quite a bit for his audience to look forward to.

“This sitcom is going to be extremely crazy and persons are going to love me. Persons who have never watched me in a play will be seeing me in their living rooms. I am coming to them,” he told THE STAR.

Meanwhile, Ramsey says he will be appearing in a play in December.

“I am not finished with plays, I am spreading my wings,” he said.

For the original report go to http://jamaica-star.com/thestar/20130930/ent/ent1.html