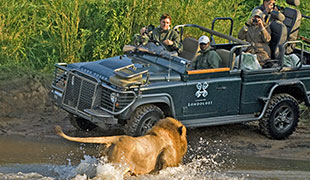 JOHANNESBURG _ South Africa on Friday disputed a reported assertion that rangers in Kruger National Park have killed nearly 500 suspected poachers from Mozambique, which borders the park, since 2010.

Former Mozambican President Joaquim Chissano said the number of Mozambicans killed in Kruger National Park had increased annually and that 82 Mozambicans died in the first six months of this year. His remarks were reported Tuesday by Noticias, a Mozambican newspaper. Chissano runs a foundation dedicated partly to conservation and to steering poor communities away from poaching.

“It’s highly overinflated,” Paul Daphne, a spokesman for South Africa’s national parks service, said of Chissano’s report of 500 deaths. He declined to provide a figure, saying the parks service does not release data on the deaths of suspected poachers. South African officials periodically report instances in which suspects are killed, including the deaths of seven alleged poachers in several incidents in early 2014.

The debate over the human toll comes as South Africa struggles to stem record levels of rhino poaching, much of it conducted by Mozambicans who cross the border into Kruger park, home to nearly half of South Africa’s 20,000 rhinos. South Africa, which has most of the world’s rhinos, reported 1,215 rhino poachings last year amid rising demand for their horns in parts of Asia, including Vietnam.

Some consumers believe rhino horn has medicinal benefits, although there is no scientific evidence.

Rangers in Kruger park are required to try to arrest suspected poachers, but some fatalities are to be expected because park staff operate in difficult conditions, often pursuing armed intruders in dense bush at night, Daphne said.

“If they are under threat, they would need to defend themselves,” Daphne said.

South African police investigate every death in the park, he said.