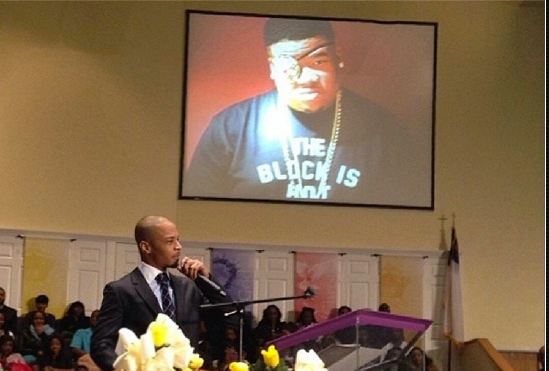 Doe B’s mother stepped to the podium and expressed kinds words for her slain son as did B’s manager Frank White. T.I., who was also in attendance, eulogized his protege speaking admirably of the rising rap star in front of a packed crowd. “I admired Doe because, as a young man at the age that he was, he always presented himself to be more mature,” said Tip. “It’s very rare that you could find somebody at the age of 20 or 21 and sit them down in front of somebody they aspire to be like and they are as composed and poised and postured and looking eye to eye with this person. It’s very rare that you find somebody at the age of 20 or 21 and you could walk them into the room with a Nelly, or you could walk them into a room with a Timbaland or Jay Z, and they not lose their cool, they’re composed, postured, with the morals, standards, and the principles that were instilled in him from his family, his mom, his dad, grandmama, brothers, sisters, aunts, uncles.”

As previously reported, Doe B and Kim Johnson were shot and killed at Centennial Hill Bar and Grill on Highland Avenue where the rapper was prepping to perform. Six other people were injured during the gunfire and taken to the hospital for their injuries, including the recently deceased Tim Hamilton. Two men, Jason McWilliams and Darius Thomas have turned themselves in to the authorities and have been charged with two counts of capital murder. More charges are surely pending with the recent news of Hamilton’s passing. Police believe the motive for B’s killing may have been an ongoing beef between Thomas and the accused.

Watch footage of the Kang’s speech, below.

For the original report go to http://www.xxlmag.com/news/2014/01/t-speaks-doe-bs-funeral/