Beyoncé Chats About Album’s Message and Lessons in Failure 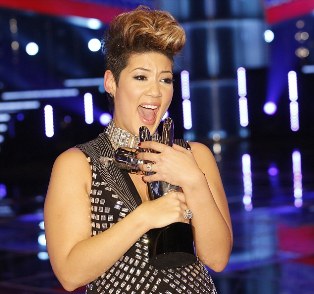 Speaking with reporters at the Jamaica Observer’s Beechwood Avenue headquarters Monday morning, Tessanne said recording should begin in January or February next year, depending on the decisions of the record label.

Tessanne said that she wants her album to be different from what she has done in the past, adding however, that it will have a reggae vibe, because that is who she is.

“My first album will most likely take a different direction, but it will have a reggae feel, that is who I am,” she said.

She also hopes to bring the producers of Universal Music to Jamaica.

“I would love for them to come down and experience GeeJam recording studios, that would be awesome,” the songstress said.

Tessanne walked away with US $100,000 and a Universal recording contract upon winning the coveted “The Voice” title on Tuesday, December 17.

For the original report go to http://www.jamaicaobserver.com/entertainment/Tessanne-begins-recording-with-Universal-early-2014