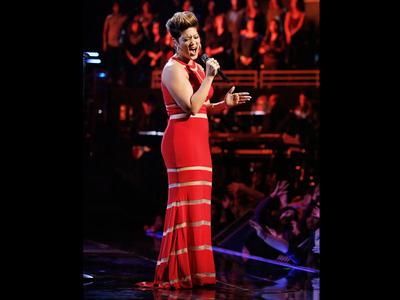 Despite not getting the big break that she has yearned for locally, Tessanne Chin deservingly got her shine when she was named winner of The Voice last night.

In September, Tessanne started her journey on The Voice, and it came to an end last night. Following the many performances in the two-hour-long show, the contestants lined up onstage to speak to the coaches and await the results.

“A better coach for me I could not find. I thank you every day for choosing me,” Tessanne said to Adam Levine.

Although she seemed calm, it could be easily sensed that nerves and emotions were high in the Los Angeles venue. Following a long pause, Will Champlin was announced as the third-place winner.

Then it was time for the major announcement.

“The winner of The Voice is Tessanne Chin,” host Carson Daly said to screams from Tessanne and many persons in the audience.

Tessanne cried and even seemed a bit shaken by the sound of the fireworks. Nonetheless, the singer composed herself enough to sing Tumbling Down that OneRepublic wrote for her.

Earlier in the night, Tessanne also got another surprise when she was given a car courtesy of Kia Motors. As she was about to enter the SUV, she may have shocked a few when she said, “We have the worst roads.”

Another special moment on the night came when Tessanne got the chance to perform with Celine Dion.

Following their performance of Love Can Move Mountains, Tessanne tweeted, “Absolutely speechless Miss @celinedion thank you for making my dream come true. You are even more amazing in person!!! It was an honour.”

In September, Tessanne’s journey began when she auditioned to be one of the singers on the show and managed to get all four judges – Blake Shelton, Adam Levine, Christina Aguilera and Cee-lo Green – to turn their chairs. She continued to wow the judges and audiences in the knockout, battle and live show rounds of The Voice.

For two consecutive weeks, Tessanne also secured the number one spot on iTunes for her rendition of Bridge Over Troubled Waters and I Have Nothing.

For the original report go to http://jamaica-star.com/thestar/20131218/ent/ent1.html