The Amazon Burns as the World Chokes 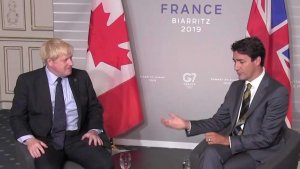 The smoking rainforest that is being described as the “oxygen of the world” is on the lips of all and the front pages across the world. Brazil is on show and the environmental crisis is likely to be on the agenda at this weekend’s G7 in Paris, France. French President Emmanuel Macron will have to resort to all his diplomatic skills to get combatants to work together to achieve success. President Trump will meet with Justin Trudeau on Saturday and Boris Johnson on Sunday. Johnson wants to keep markets open with Canada as he pulls UK out of Brexit by the end of October 2019 as projected. Will this plan be derailed?

The new kid on the block and anti brexit Boris Johnson, new PM of UK must tread a tight rope. Boris Johnson finds himself in a very difficult position as he does not want to offend his friend Donald Trump, president of the USA. Johnson needs solid trading partners should Britain leave the EU. Johnson like Trump is believed to be skeptics as it relates to the real impact of climate change. They are not excited about the widely reported negative effects of Global Warming. When two of the leading world leaders have not bought into the perceived environmental impact of the melting ice and warming arctic climate zone, we are in for an almost impossible task of getting this crucial buy in which is so critical for tackling this environmental crisis like the burning Amazon rainforest. They wield real power and their utterances are widely reported.

Is Jair Bolsonaro A New Convert?

Recent utterances by Bolsonaro appears to be sending mixed signals. Is he a new convert or a deceiver?. Reports are he has committed himself to sending tens of thousands of troops to fight the fires raging in the Amazon. Also he is quoted as saying over this weekend “I have a profound love and respect for the Amazon” he told Brazilians. “Protecting the rainforest is our duty”. The Brazilian president concluded. When did Jair get his conversion?

Trudeau. a long time convert, knows very well the value in protecting the environment due to the vastness of Canada and the abundance of wildlife there in. Trudeau needs no lessons from anyone. The First Nation folks are his greatest teachers. He had better listen or else …

Brazil’s president Jair Bolsonaro is another unbeliever as it relates to protecting the environment. Already he has been labeled a “liar” by Macron of France as Macron feels that he was deceived by him. Who will win the day … the skeptics or the environment?

While all these political and economic jockeying unfolds, the Amazon rainforest continues to burn uncontrollably. Trump praises Jair … for what we are bound to ask? It is all so bizarre that it makes for a comedy show with a dubious cast with leading actors passionate on doom and gloom most qualified for an Emmy in pursuit of the destruction of our civilization.

Will we soon be choked due to lack of oxygen?

The verdict is yours. This is our perspective.