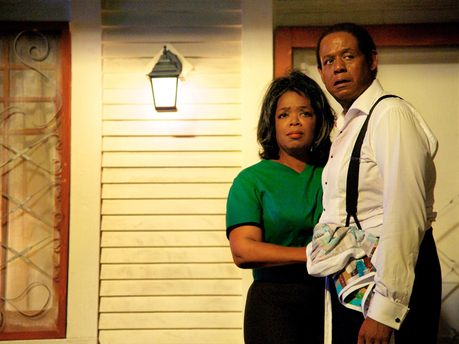 LOS ANGELES — “Lee Daniels’ The Butler” is serving up success at the box office.

Starring Forest Whitaker as a longtime White House butler and Oprah Winfrey as his boozy wife, the Weinstein Co. biopic debuted in the top spot with $25 million, according to studio estimates Sunday. But the weekend’s three other major new releases, including the action romp “Kick-Ass 2,” failed to find traction with fans.

“We expected to do well, but we didn’t expect to do this well,” said Erik Lomis, president of distribution and home entertainment for Weinstein Co., adding that “The Butler” is the company’s first No. 1 debut since 2009’s “Inglourious Basterds” directed by Quentin Tarantino.

Even with a full slate of newcomers, last week’s top movies claimed the second and third spots in the box-office race. The Jason Sudeikis-Jennifer Aniston Warner Bros. comedy, “We’re the Millers,” held onto second place in its second week of release with $17.78 million, while last week’s No. 1, Sony’s “Elysium,” dropped to third with $13.6 million.

“It was tough if you were any other film opening other than `The Butler,”‘ said Paul Dergarabedian of box-office tracker Hollywood.com.

“Maybe it should have been Oprah Winfrey’s `Jobs,”‘ Dergarabedian said. “It would have had a better shot.”

Apart from Winfrey’s unmatched marketing power, “The Butler” also marked the mogul’s return to the big screen for the first time since 1998’s “Beloved.”

“She was a significant factor” in the film’s success this weekend, Lomis said. “Her publicity machine really kicked into high gear, and the entire cast, Lee Daniels and Forest Whitaker, they delivered a quality film and a great campaign.”

The summer typically belongs to superheroes and big-action fare, which is why Weinstein chose to release “The Butler” now.

“It’s different from pretty much everything else in the marketplace,” Lomis said. “That really seemed to help.”

But the power of Oprah cannot be underestimated.

“It’s stronger than anything else,” Dergarabedian said. “An Oprah Winfrey endorsement virtually guarantees you a hit.”

Estimated ticket sales for Friday through Sunday at U.S. and Canadian theaters, according to Hollywood.com. Final domestic figures will be released on Monday.

For the original report go to http://www.ctvnews.ca/entertainment/the-butler-tops-box-office-with-25m-debut-1.1416170