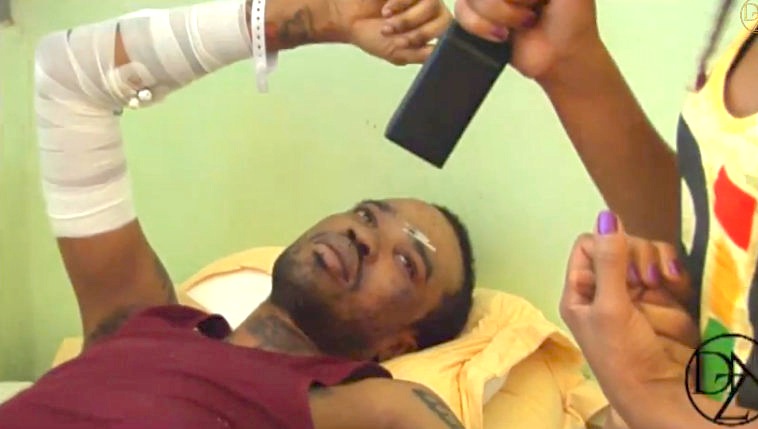 Tommy Lee is currently recovering from his injuries received in a car accident earlier this month.

The “Spartan Angel” deejay says he is lucky to be alive and is asking his fans to drive safe.

Radio personality Nikki Z caught up with the Mobay artist in the hospital where he shed some light on the crash.

“The Saturday morning around 3 a.m. I was on the road near Ritz Carlton when someone flew passed me,” Tommy Lee recalled. “I prepped my mirror to see if anyone else was following him because sometimes they race, and when I looked back on the road I was drifting towards the bank. So I swung out the bank and there was another car in front of me that I had to swung out of. That car got out of control and instead of I pressed the breaks I pressed the gas.”

Tommy Lee girlfriend, who was also in the car, sustained minor injuries and was treated and released from the hospital. Lee received a broken leg and injuries to his right hand. The deejay says he was ejected from the vehicle which later fell on his leg breaking it three places.

The former Portmore Empire artist also opened up about Vybz Kartel, whom he insist he is still good friends with.

“Him need to come back a road now because its a long time they have him in there,”Tommy lee said. “Me and Kartel good there is no problems I would never do anything to harm him.”

Watch the interview below.

For the original report go to http://urbanislandz.com/2013/11/19/tommy-lee-told-his-fans-to-drive-safe-talks-accident-vybz-kartel-video/