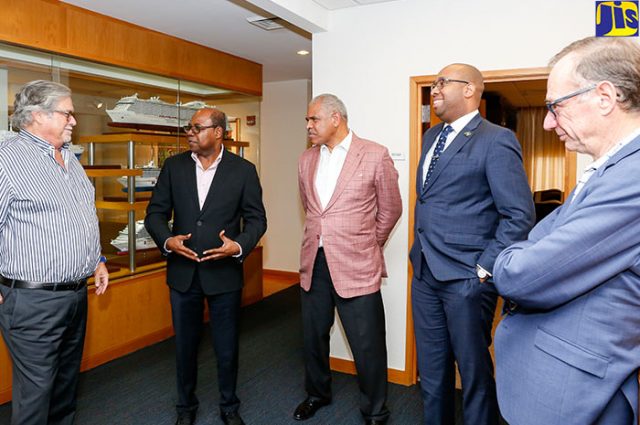 Mr. Bartlett, who is currently attending the Caribbean Travel Marketplace in Puerto Rico, said a recent trip to Carnival Corporation’s headquarters in Miami resulted in one of “the biggest cruise endorsements” Jamaica has received “in some time”.

“The owner and Chairman of Carnival Corporation, Micky Arison, referred to Jamaica as one of the best and most diversified destinations in the world,” Mr. Bartlett told JIS News.

“Putting this in the proper context, we just have to remember that Carnival is the biggest cruise company in the world, which currently has eight huge cruise vessels with a capacity for 6,000 passengers each.

Mr. Bartlett further noted that the Head of Carnival, who also owns the professional United States basketball team, the Miami Heats, pointed out that with his company growing at four new ships per year, “the partnership with Jamaica will continue to grow also”.

“Mr. Arison is no stranger to Jamaica, and has visited many times with his family,” the Minister added.

He also revealed that Mr. Arison has committed Carnival’s newest Excellence Class vessels, valued at US$1 billion each, to Jamaica.

Mr. Bartlett said the Carnival commitment is in line with other “signals we have been receiving” from other cruise lines. He noted that the second largest cruise company, Royal Caribbean Cruise Line, whose Oasis class vessels are the biggest ships in the world, has also been a huge supporter and “a valuable partner”.

Currently, the Falmouth Port is host to Harmony of the Seas, Allure of the Seas and Oasis of the Seas – the three biggest cruise ships on the planet.

The Minister said the infrastructural work being carried out in Falmouth is very important, adding that “we have to ensure that the people of Falmouth also benefit from what is happening in the town”.

“This continued growth in arrivals is proof that our tourism product remains robust and sought after by tourists worldwide. These figures mean that for the period, there were 10,855 more arrivals when compared to the same period in 2017,” he added.