Aidonia made females lose themselves

In love with a legend 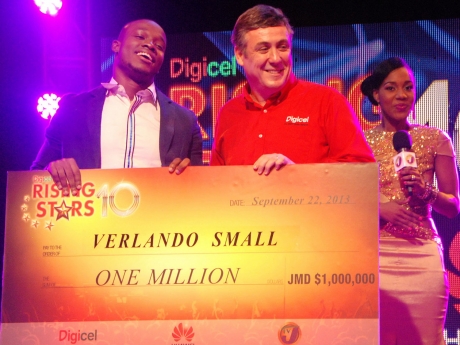 Amid all the floral tributes and performances, it was Digicel Rising Stars 2013 winner Verlando Small who stole the show at the Salute to the National Heroes concert at The National Heroes Park in Kingston on Monday.

With the afternoon sun finally giving those on hand a break, Small took the stage with his saxophone in hand.

Starting his gospel medley with Catch A Fire, Small had everyone in the audience moving in their chairs almost from the first note.

And he did not need any singers either, as they sang every word to the songs he played. When the Motown medley started, there were screams in the audience, followed by rhythmic clapping.

Even as George Nooks performed Bridge Over Troubled Waters, Small still had the attention of the audience as several persons flocked to him to take pictures and get his autograph.

Nonetheless, Nooks continued and closed the show with God Is Standing By.

Earlier in the evening, floral tributes were made to the national heroes, while the Jamaica Military Band played patriotic songs. This was followed by another tribute from Father Ho Lung and Friends who did God Almighty. Their strong harmonies filled the air and the four men sounded almost as powerful as a full-strength choir.

A youngster, Rakeem Nunes, did a piece called ‘Culture’ and created a bit of a spark. As he spoke about the various foods and aspects of the Jamaican culture, he made reference to “piece a yellow yam from under di grung”, and a woman in the audience shouted, “Mi wuda eat piece right now!”

There was also another decent showing from the Nexus Performing Arts Company.

There was not much to talk about when they did I Saw My Land In The Morning, but their Marley Tribute had quite an impact and had people singing along, especially with Who The Cap Fit, No Woman No Cry and One Love.

For the original report go to http://jamaica-gleaner.com/gleaner/20131024/ent/ent3.html