Photo of: A'Legends at the Courtleigh Hotel, New Kingston, Jamaica.

Star girl “A’Legends” from Philadelphia, USA did pop up in Jamaica amid swirling talks that the fashionist was invited by a top-notch entertainer who does not need bleaching cream to look refine, or plastic surgery to straighten his nose, which is nothing compared to Flat Bridge. 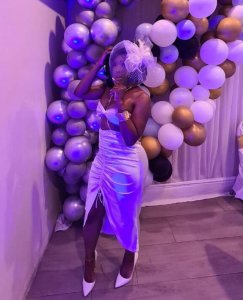 Cute Jenelle Thompson, along with her super- active four year-old A’Legends (his real name) stayed at The Courtleigh and  Hotel and Suites in New Kingston. This is just a step away from the Jamaica Pegasus Hotel; overlooking the well- manicured lawns of Emancipation Park, and arms length from The National Housing Trust.

Speaking of the park, A’Legends refreshed her knowledge with much  lessons of our National Heroes and had a few words with Vision Caribbean TV.

“Relatives used to take me here whenever I visited Jamaica, and Devon House where I had my favourite rum and raisin ice- cream.”

She just couldn’t allow me to ask about her favourite night. (Come on, don’t you dare harbour any naughty thoughts). It was, infact, a surprise 60th birthday party for her aunt Fay.

Advertised as a wedding, her dear aunt was ready to meet her daughter’s groom.

“Where is the white man from London?” Apparently, this is where her daughter’s beau lives,”  The moment was one with an air of curiosity which almost kill the “surprise!” which came from some fifty-odd quests.

Jenelle stole the show, wearing an outfit  befitting a queen showing up at a gala performance.  Her attire was a tight -fitting lily white two-piece skirt set which showed up her curvy contours, including her bouncing hips.  On her head, was a white Kentucky Derby hat partially meshed with white feathers. This gave her facial features a sparkling look with the blue lights which decorated the atmosphere.  Below, her white stiletto heeled shoes got more stares than the quest performer.

She also catch more than a glimpse  of Monkey Island in Portland. “We had to catch a boat from Blue Lagoon, but it was such a smooth ride.” There, she ate  Kentucky fried chicken, then cooled out in the shade and enjoy the picturesque scenery.

She also visited the family house in Kencot, Kingston and her late father’s resting place at Meadowrest Memorial Gardens  in St. Catherine.