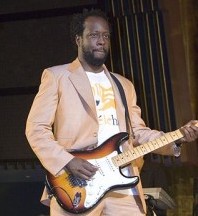 PORT-AU-PRINCE, Haiti (AP) — The Haitian presidential election has become a battle of the pop songs, with Wyclef Jean (ZHAHN) of The Fugees weighing in. Jean was a big supporter of outgoing president Michel Martelly but has chosen to support Jude Celestin rather than Martelly’s chosen successor, Jovenel Moise. Martelly’s son, Olivier, is also a Haitian singer, and he’s rushed out his own song in favour of Moise. Several candidates are running in Sunday’s election, and the two highest vote-getters will have a runoff on December 27th. Jean himself ran for president in Haiti five years ago but was disqualified for failing to meet residency requirements.