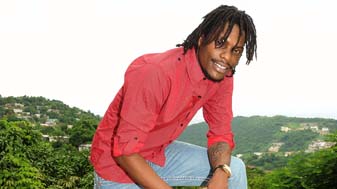 Dancehall artiste/media personality ZJ Liquid has received his first international breakthrough in the capacity as a recording artiste, courtesy of a collaboration with Chris Brown and Nicki Minaj.

The collaboration is a remix of Brown’s latest single, Love More, which currently has over 14 million views onYouTube.com.

The remix featuring ZJ Liquid is produced by Refix King, and, according to the DJ, the connection was first made via Instagram.

“A some guys mi reach out to on Instagram, they did a Miley Cyrus remix and I told them I like it. They then reached out to me and asked me to do a remix for them. When I reached in New York they sent me the Chris Brown track and asked me to record on the remix, so I recorded the verse the same night in New York right before I went to the Shaggy launch and emailed it. He then replied and told me that the label loved it and that they would blast it and send it out. By the time I reach Jamaica, it was already getting airplay,” the DJ/deejay revealed.

Liquid says the producers in the US, are already executing an aggressive promotional campaign to break the song. However, he is also gearing up to do his leg of promotions locally. He also says since the beginning of 2013, his career as a recording artiste has improved significantly and has seen him performing at several events in the Caribbean, the US, and Canada.

His single, Bubble, is also a popular song in the dancehall circles, and has been used by several European dancers in their choreographed routines.

Liquid recently filmed the music video for Bubble and is looking to release it in coming weeks.

As it relates to his current collaboration with Chris Brown and Nicki Minaj, Liquid says he is running with the opportunity, as the young crop of dancehall and reggae acts are now making their mark as it ought to be.

“Yu nuh see all A$AP Rocky dem a follow wi. A Shabba swag a run foreign now and a lot of artistes doing well on the international scene. A just the young youth dem a put een the work and a deal wid it the right and proppa way,” ZJ Liquid said.

The artiste is also gearing up to perform in the US, this week, after which he will head off to some Caribbean islands then to Canada.

For the original report go to http://jamaica-star.com/thestar/20131003/ent/ent1.html