To Dream is to Win: Sandals Resorts Sponsors the 2022 Jamaica Bobsleigh Team

CHICAGO, Feb. 2, 2022 /PRNewswire/ — The Foundation for Sarcoidosis Research (FSR), the leading international nonprofit organization dedicated to improving the lives of those impacted by sarcoidosis and accelerating research towards a cure, is proud to announce its partnership with actress and sarcoidosis advocate, Jeryl Prescott. Prescott is best known for her roles in AMC’s “The Walking Dead” (Jacqui), DC Universe’s “The Swamp Thing” (Madame Xanadu), Netflix’s Resort to Love (Naomi King), and most recently “All the Queen’s Men” (Judge Martha), currently streaming on BET Plus. Prescott joins forces with FSR to promote the organization’s Ignore No More: African American Women & Sarcoidosis National Campaign, throughout Black History 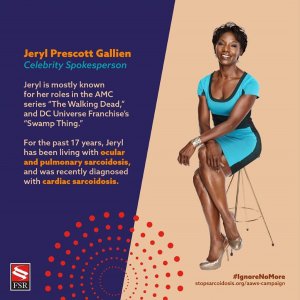 Month (2022’s theme is Black Health & Wellness) and American Heart Month this February and to reveal her own struggles with this complex rare disease. Prescott’s passion for raising awareness for sarcoidosis among African American women stems from her own difficult journey and her recent diagnosis of cardiac sarcoidosis, in addition to her previously diagnosed pulmonary and ocular sarcoidosis.

“I wasn’t always ready to speak out regarding my diagnosis, but I think it’s particularly important now to spread the word,” said Prescott. “I’m speaking out because I care about my community. Until I learned about the Foundation for Sarcoidosis Research, I was only able to find the most superficial references to sarcoidosis online. Many of these rare diseases run in the family and the more we know, the better we can prevent and treat these diseases and maybe avoid some of the more severe consequences.”

“Sarcoidosis is difficult to diagnose and has very limited treatment options and no known cure,” said Dr. Yvette Cozier, Senior Epidemiologist and Investigator on the Black Women’s Health Study and the BWHS Sarcoidosis Study at the Slone Epidemiology Center at Boston University School of Medicine, and member of the FSR Women of Color Clinical Advisory Committee and FSR Board of Directors. “It’s important to note that while approximately 175,000 people are living with sarcoidosis throughout the United States, African-American women bear the greatest burden when compared to all other groups impacted by sarcoidosis.”

“Although we are saddened to learn of Jeryl Prescott’s progressing sarcoidosis, we are grateful to her for speaking out publicly to help raise awareness about sarcoidosis. We are honored to be working with her on the Ignore No More campaign,” said Mary McGowan, CEO of FSR. “Her partnership will help amplify critical messaging about the disparities African American women face when it comes to sarcoidosis and drive vital attention to this significant health issue.”