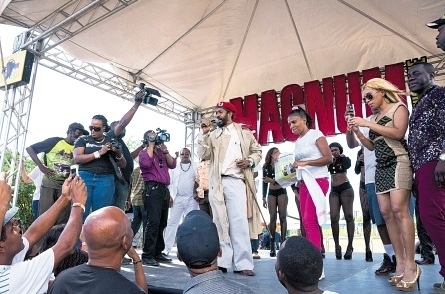 HUNDREDS of residents turned up at the Cockburn Gardens Primary and Junior High School on Hagley Park Road in St Andrew yesterday to welcome deejay Super Cat, who visited his old neighbourhood for the first time in years.

The event, a homecoming party and community tour, was organised by Supreme Promotions ahead of the artiste’s Box Day performance at Sting.

He visited the Mustard Seed Community, which offers shelter to abandoned and disabled children, and the community-owned Roots FM radio.

Cat then briefly visited his old haunt at Bamboo Lawn on Broadleaf Road, where he honed his deejay talents. He obliged the residents by dropping some lyrics to a rhyhym.

The artiste’s co-managers Earlton Clarke and Camille Evans said he was pleased with the warmth shown by residents.

“He was extremely humbled and honoured by the reception. He is really looking forward to Thursday night at Sting,” said Evans.

According to his handlers, Cat arrived in the island at approximately 5:00 am yesterday.

Super Cat, whose given name is William Maragh, is a veteran of the sound system circuit.

He was signed to Columbia Records and released his debut album Don Dadda in 1992. The set included the hits Dem No Worry We, Nuff Man a Dead and Don’t Test.

One year later, Sony Music (Columbia’s parent company) issued The Good, the Bad, the Ugly, And the Crazy. It was a strong seller and led to other acts being signed to the Sony Music group, as well as other major labels.

For the original report go to http://www.jamaicaobserver.com/entertainment/-CAT–COMES-HOME-TO-SUPER-WELCOME_15685877