Deejay Chuck Fenda, known for such songs as, “Eternal Fire,” “Coming Over” and “I Swear” had organisers of September’s Boston Freedom Rally, praising his outstanding performance as headliner for the show. The event, organised by the Massachusetts Cannabis Reform Coalition, pulled a record-breaking 100,000 people. 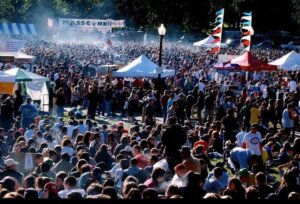 Photo: Section of the crowd at Boston Freedom Rally.

The Boston Freedom Rally is an annual event in Boston, Massachusetts. Held on the third Saturday in September, it is traditionally the second largest gathering demanding marijuana law reform in the US after Seattle Hempfest.

In an interview with Vision Caribbean TV, Jennifer Julien Gaskin says, “Big up to Chuck Fenda an amazing performer. We have never had such a huge crowd before. The organisers were familiar with Chuck Fenda’s music. We wanted a headliner who could connect to the people and the theme, “Flower To The People.”

“Never in our 33 years we have had so many people at this event (Boston Freedom Rally). One hundred thousand patrons is no easy task to get out,” she added.

Responding, Chuck Fenda says, “I have performed at some major shows and called back on stage, but this show demonstrates that people love my music and that it is the message that connects with the struggles and reality of life.”

Chuck Fenda’s 45 minute set began with his entrance from a side gate proclaiming:

“I am not sure who is at my door

Back stage hundreds of patrons squeezed through to get his autograph.

Born Leshorn Whitehead, the deejay began a thriving music career releasing “Jah It’s All about You” produced by King Jammys in 1997. This gave him a lot of traction in the Caribbean and Canada.

Some of the big shows on which he has performed include Reggae Sumfest, Sting, Reggae Jam (Germany) and Reggae Geel (Canada).

His latest project is a new album, “Eternal Fire” with 15-tracks to be released soon.