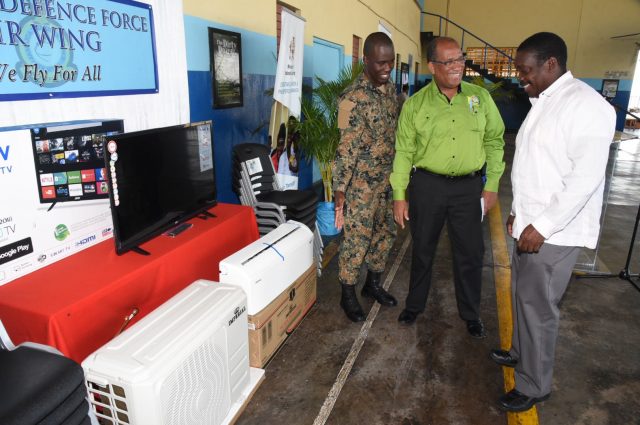 Minister of National Security, Hon. Robert Montague (right) along with Chief Executive Officer of the Passport, Immigration and Citizenship Agency (PICA), Andrew Wynter (centre), and Acting Commander of the Jamaica Defence Force (JDF) Air Wing, Major Anthony Gregory share in a lively conversation at the presentation of a number of appliances during a ceremony held at Up Park Camp on March 23.

Minister of National Security, Hon. Robert Montague is reporting that major crimes are trending down.

“So far the numbers are looking good since the year has started. When we started out in January, we started with a bang in terms of murders, but since then we have seen the numbers trending down,” Mr. Montague stated.

He was speaking at a ceremony held at the Jamaica Defence Force Air Wing at Up Park Camp on March 23, where he presented appliances to the group.

The Security Minister said the figures were trending down from January “where we were 20 per cent up on last year’s figures and we are now four per cent over where we were last year.”

“We are trying to move that to below last year and we can’t do it without the vital input of the Air Wing,” Mr. Montague stated.

The Minister, urged the JDF Air Wing members to regard their part in the eradication of crimes as important.

“It is going to take unified and hard work on the part of good people like you, to stabilize the situation, and then have it trending down,” the Minister told the soldiers.

Meanwhile, Acting Commander of the Air Wing, Major Anthony Gregory,welcomed the gift of appliances noting that it will “enhance our comfort. This donation will make it a little bit more comfortable when we are in this environment, as we defend our nation from the scourge of crime and violence.”

Last year, the JDF Air Wing conducted over 150 casualty evacuation missions, as well as other search and rescue missions on land and at sea.