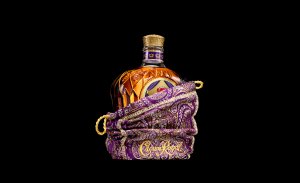 NEW YORK, Feb. 26, 2021 /PRNewswire/ — Throughout Black Heritage Month, Crown Royal is continuing to celebrate and honor heroes in the Black Community who have achieved royal status through hard work and a generous spirit. It is through this lens that a truly royal limited-edition pack was created, inspired by the film Coming 2 America.

The Crown Royal | Coming 2 America limited-edition pack is designed by Oscar-winning Costume Designer, Ruth E. Carter and features a bottle of Crown Royal Fine De Luxe Blended Canadian Whisky outfitted in a unique purple + gold stitched bag that ties back to the royal roots of Crown Royal. In addition, each bottle comes in a collector’s edition Coming 2 America packaging. Crown Royal has a deep admiration for Ruth’s work, which transcends culture through fashion and film, and her ability to utilize costume design to share stories and experiences.

“The inspiration behind the Crown Royal x Coming 2 America limited-edition package largely ties to royalty. The royal legacy of Crown Royal as well as Coming 2 America. The film re-imagines Black excellence and what it means to be royal,” said Ruth E. Carter, “I intentionally pulled patterns from the Zamunda Royal Family’s clothing worn in the film as I worked through the design of both the bag and custom packaging.”

#BlackRoyalty is all about uplifting the culture and celebrating the Black community, those who are living generously and showing up for themselves and others. We at Crown Royal value how they’ve shown up for us, and we want to do our part to show up for them. Through this effort, Crown Royal is uplifting the next generation of Crown Royal fans —in particular, those who have continued to achieve so much despite obstacles they have faced.

“The story of Crown Royal is one of royalty—it’s who we are and who we’ve been from the very beginning,” said Johannah Rogers, Director, Whiskey and Multicultural lead. “It’s this legacy of royalty that we honor and will continue to honor. That’s why we’re celebrating this legacy with Coming 2 America, which was brought to life by Ruth E. Carter in her design of the limited-edition pack.”

Crown Royal also spoke with Coming 2 America star and critically acclaimed musician and actor, Rotimi, for a Royal Cuts content series. Rotimi discussed everything from his definition of royalty, to how he and other Black entertainers and actors have been inspired by the original Coming to America, to Ruth E. Carter’s work on the movie’s costume designs and the inspiration behind the Crown Royal LTO packaging.

The Royal Cuts series by Crown Royal content is live on Rotimi and Crown Royal’s social channels leading into the movie’s premiere. Join us in sipping our signature cocktail, the Crown Royal Manhattan during the Coming 2 America movie premiere on March 5th on Amazon Prime Video. And as always, please enjoy responsibly.